If you've been following my blog for a bit, you'll know it's no secret that growing up I was head-over-heels in love with Jason Bateman. Jason, Corey Feldman, Sean Astin, Kirk Cameron and Ralph Macchio were my other top favorite teen stars - I had scrapbooks, posters, pin-ups, etc. I wrote them countless letters in hopes of some sort of acknowledgment.

Anyway, during the Silver Spoons/Family Ties era of 1983, my favorite actor and actress were Jason from Silver Spoons and his big sister Justine from Family Ties. I watched both shows religiously while sitting Indian style on the floor of our den, glued to the TV set.

I must have sent Jason at least five letters before turning to his sister to find out why I was getting the brushoff. I thought, WTF? I had to be the coolest 11-year-old fan he had. I wore preppy sweaters and liked cool music like Jason. I knew all of his favorite foods, colors and movies. I could see us hanging out at the arcade together sipping a Slurpee (well, Mom didn't allowed me to have Slurpees, too much sugar, but still).
I read so many articles in Tiger Beat and Bop about Jason. It was like I actually knew him. I loved how we were both from New York -- even though he was from Rye, a place I had never been to. The only thing I knew about Rye at age 11, was that it was home to Rye Playland, an awesome-looking amusement park often advertised on WPIX. 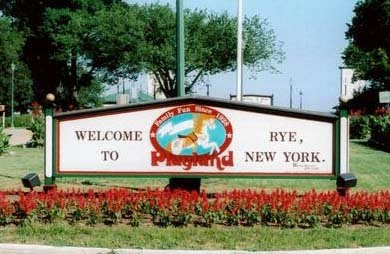 I knew Jason's mom was a flight attendant. I knew his middle name was Kent, after his dad. I knew his birthday was January 14. I knew his height and weight.  I knew every single TV show he had ever appeared on. Yes, I was his biggest fan. Let the loser girls have Ricky, "The Ricker" (super lame!) -- Jason was all mine!
So one fateful July summery day, I received a postcard from Justine. I had begged her to have her bro send me a note and an autographed photo. There it was, in green ink, the artsiest, coolest handwriting ever - a note written just to me! PERSONALLY! It said:
"HI ALLYSON - JASON HAS YOUR LETTER BUT HE IS GETTING NEW PHOTOS SO HE WILL ANSWER YOU NEXT WEEK. THERE IS A STORY & PICS IN 'TEEN BEAT' & NBC NEW YORK HAS A BIO AND 'PEOPLE' & 'TV GUIDE' HAVE INFO."
[click on images to view larger] 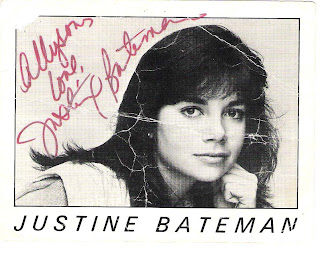 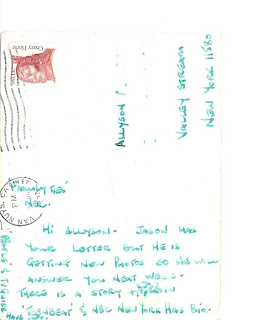 A few days later, I received a postcard in the exact same handwriting, confirming it wasn't really Jason or Justine who replied. My heart sank. Maybe it was their mom. Maybe it was their publicist. I was crushed, yet still excited to snag their autographs. 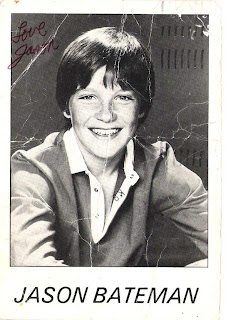 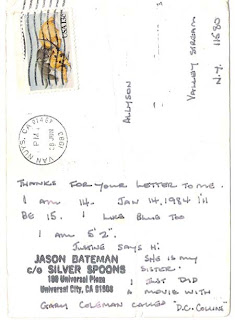 "THANKS FOR YOUR LETTER TO ME. I AM 14. JANUARY 14, 1984 I'LL BE 15. JUSTINE SAYS HI. SHE IS MY SISTER [NO SHIT DUDE!] I JUST DID A MOVIE WITH GARY COLEMAN CALLED 'DC COLLINS' [YES, I KNOW THIS ALREADY].
So that was the last I heard from the Bateman's. We weren't going to be friends. We weren't hittin' the mall any time soon. Jason and I wouldn't be playing an intense game of Pac-Man in the near future. He wasn't moving back to NY. He was probably living life in that magical place I had never been to called Woodland Hills. Home to Corey and all of the other cool kids, while I rotted in Nassau County, Long Island. Home to nobody cool at the time other than Billy Joel who was much too old for me. 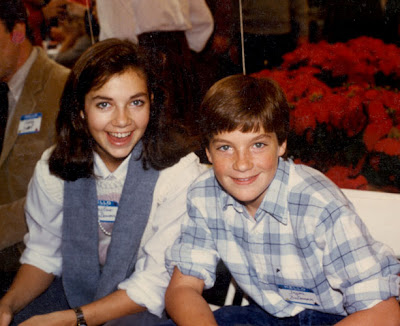 I never really followed Jason into adulthood. I gave up on all of this teen idol nonsense by about 9th grade. I recently checked in on ole JB on Wiki. It turns out his parents were living off of his and Justine's paychecks. He married Paul Anka's daughter, which is pretty cool - my dad used to sing Paul Anka songs to me when I was little. Dad and I danced to his song "Time Of Your Life" at my wedding.
Jason today still working hard in movies and TV 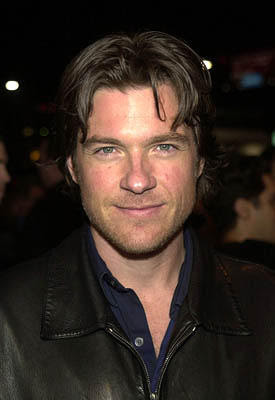 I can't believe the amount of things you still have from your childhood. Even better the fact you are sharing.

have a great weekend!

Basically I kept a big trunk at my mom's house. Inside are all my diaries, trinkets, teen idol stuff all in the Trapper Keeper. It's like one box filled with memories. Hope my mom never tosses it. One day when I get a job, we can get a house and I will have a place to store it!

Hey I still have my speak n spell loaded with the ET module, does that count? My three year old loves playing with it.

Hi! I am your newest follower!
Have a nice day!
hugs

I think that is great!

I wrote to Robert Wagner and Stephanie Powers from Hart to Hart and got a pic and letter when I was little.

Do you think if kids write these days, they get a reply? I wonder.

Autographs are still cool, even if they didn't write you personally. Another great post.

I like Jason Batemen, but I like him now. I wasn't aware of him until he got older. I used to love Family Ties though and Mallory was my favorite character besides Alex, this is probably pretty universal. I loved Justin Batemen most recently in "Juno" and I enjoyed him in "Arrested Development".
I was never a big celebrity person but I am embarassed to say I did write one fan letter when I was twelve, it was to Christopher Knight (Peter Brady from "The Brady Bunch").
I was never embarassed by that fact until he became an adult and I watched him on the "I'm in Love With a Brady" show.
Wish I could take that letter back.

ALAS~little did you know you were just the right age for Billy Joel, like his child bride Katie Lee, who dumped him recently for some Israeli fashion designer! XO

"...while I rotted in Nassau County, Long Island"

Love Jason Bateman! Who didn't love his smart ass comments on "Silver Spoons"? He turned out to be a really good actor... loved him in "Juno" especially.
Justine... poor Justine. Doing Lifetime dramas these days. Never was the same for her after "Satisfaction". Remember when she was designing scarves???
Ian's right... it is very cool how you have all of this stuff!

Wow.. so cool! I think the only Autographs I have from my youth are from Scotty and Uhura (james Doole and Nichelle Nichols) from a mall show, and Ronald McDonald. (The real Ronald from the 80's commercials) My Mom was in food service and got his autograph for me back in the early 80's.

And that episode of Arrested Development where Justine guest starred as a hooker and nearly hooked up with her real life brother? Squirmingly awesome.

OMG! I LOVED Jason and Justine! I also would read Tiger Beat and Bop! That's crazy that you have those postcards :)

Thank you for the awesome memories! Sigh! I wish I was brave enough to have written to my crushes when I was a young girl!

I've always really disliked Jason Bateman as an actor. He's just one of those guys that annoys me. I saw him in 'Up In The Air' the other day, and it really put me off.

Justine, on the other hand, will always have my respect because she got to be Alex P. Keaton's sister, like I always wanted to be.

You know when I was little, my mom founded the charity called The Rainbow Society in Winnipeg, Canada (same idea as The Make a Wish Foundation but before its time) and she hosted this charity event called "Hollywood Goes Hockey" which had hockey players play against celebrities (I really think it was the first of its time)...anyway, I was 7 at the time and Richard Dean Anderson (MacGuyver) was there...he started making funny faces at me and I blushed the colour of a lobster. I don't think I knew who he was at the time but looking back, man I was a lucky girl!

Love your blasts from the pasts!

I think Jason Bateman is actually more attractive now then he was when he was younger. But I loved him on Little House on the Prairie.

Those are so awesome! I can't wait to see what else you've kept!

Hi! I'm a new follower from Follow Friday. Your blog is awesome! I still have boxes with my childhood stuff too like magazines and my caboodles :)

Oh, now those are just plain AWESOME. I am super jealous.

I loved Justine back when I was obsessed with Family Ties! Now one of my favorite shows is Arrested Development, which mostly everyone knows, stars Jason Bateman.

This post brought me back to the days when I loved teen magazines and would cut out pics of NKOTB and Corey Haim and tape them to my walls!