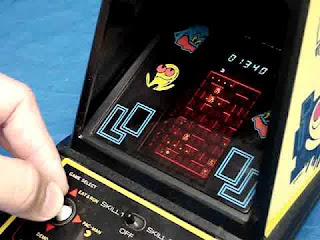 In 1982, this Pac-man game was the coolest toy around ... It was like a mini arcade version of Pac-man. Created by Coleco, this small tabletop game was awesome. Although I never had one, I sure wanted one. I wasn't super spoiled and had Atari so that had to suffice.

Did anyone out there own this? I've thought about getting it on eBay, but nothing beats the full-sized arcade Pac-man.
at 10:47 PM 15 comments:

The Meanest Teacher Ever ...


We've all experienced it at some point in our lives ... The meanest teacher ever. Think back, maybe you'll recall a grammar school teacher who made every day a living hell. Maybe it was a high school teacher that had it out for you  ... each day more torturous than the last.

For me, it was third grade. We'll call her Mrs. Jones. She was a total hideously scary beast. Please forgive me for being 100% candid here, but she really was one sick, ugly, old broad. Lucky for me, my folks yanked me out of that hellish classroom and transferred me to private school before Thanksgiving. But the pain I endured for the first few weeks of third grade, truly were unbearable.

Every once in a while, I forget about it... Then something happens and the feelings of insecurity and worthlessness come back. And to think, this was just a teacher. It makes me cringe thinking about kids who may have lived with parents who made them feel this way. I was lucky, I only had like two rough months of adult vs. child bullying.

Making my classmates clap if I finally got a math problem correct. Making me position my desk next to her desk so that I was physically facing the class for weeks and weeks. Each day she'd tease me, taunting that if I was good, maybe I'd be able to sit back with the rest of the class. That never happened. I don't know what prompted such treatment. Was I was caught whispering or passing a note to another student? I was an upbeat, fun-loving kid. She broke me. She broke my spirit. She made me feel stupid.

As the child of two teachers, I was taught to always be mindful of the other students and treat teachers with respect. I didn't think to say anything back or tell another teacher. How could I win against the ruler of the class?

It wasn't until my mother was forced to sit alongside Mrs. Jones isolated from the other parents, facing them throughout an entire Parent-Teacher night, that she realized what was going on. It was then that she understood that my morning stomach aches were more mental than physical. It was at that moment, she knew why on Sunday nights I cried in bed and dreaded waking up on Monday mornings. I would have welcomed a natural disaster every day over having to drag ass into that classroom awaiting the doom of Mrs. Jones.

Years later, somehow, people found out that Mrs. Jones had a drinking problem. I'm not sure how they discovered this scandalous bit of info ... Perhaps Mrs. Jones  was suspended? I'm not quite certain, but one thing was confirmed... She was a  mean, horrible, angry drunk who took her evils out on small children.

A former classmate of mine found me on Facebook and we talked about how things went in the early fall of 1980. I had no idea there were others who were shamed and humiliated at  Mrs. Jones' expense. Though this doesn't make me feel better, at least I can mentally accept the fact that it wasn't just me. It makes me feel better knowing there were others.

Your turn ... Please share your story of the meanest teacher you've ever had and thanks for reading.

Milk, it does a body good!

Anyone remember the "Milk, it does a body good" commercials from the late 1980s? There were so many of them -- developed by McCann-Erickson Worldwide -- and each one featured a different kid, or several kids against a gray backdrop...

The theme was basically that drinking milk will make you hot or beautiful once you grow up. I never drank milk growing up, just didn't like the taste. I'm all grown up now, and well, I'm far from hot. My cousin, on the other hand, she drank milk by the gallon. She's now a successful lawyer, very hot and very wealthy. Hmm... Truth.

Here's one I found ... PS In retrospect, I realize many of the kids cast in these commercials have Long Island accents.