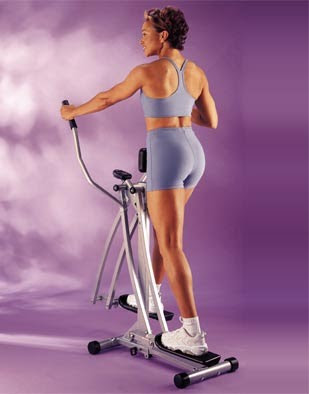 I'm celebrating the fact that I have reached over 50 blog followers today by blogging TWICE in one day.  A quick thanks to everyone for their feedback, comments and support. You guys make it worthwhile. Gay I know...

By looking at me, you'd never guess I belong to a gym. Nah, you'd never believe that I actually work out at least four times a week. This isn't some silly New Year's resolution. I've been steadily going to the gym since 2006. Now if only I could just stop eating. OK, enough about me... check this out...

There's this chick who's super hawt and looks like a college student. She obviously doesn't work the typical 9-5, because she's there during random afternoon hours. She's friends with all of the employees and spends most of her time chatting with the front desk girls and trainers. She dresses in full-fledged, pricey-looking, trendy workout gear. Me? I'm still sportin' tattered and torn tees paired with well-worn 3-year-old sweat pants from Old Navy.

I don't know why this bothers me so, but it does. Every time I see "hawt chick", she's never, ever working out. Today I eyed her getting on machines, playing with her hair, toying with her iPod, peering around the immense gym floor, yet never moving a muscle.  She quickly jumped off after a few minutes of not working out and used the hand sanitizer. She stopped to check her look in the mirror as I watched her watching to see who was watching her from behind. Yes, that's a lot of watching.

I moved on to the next machine, pretending not to eye her. She slowly got onto another machine and looked around playing with her headphones. She stopped to chat with an older gentleman who said he hadn't seen her in a while. She twirled her long brown hair while looking around and said she's been "working out" in the late afternoons. She smiled and I wanted to yell over, "Ha ha, work out? More like hang out!" Don't worry, I didn't say that though.

By this point, I was ready to wash my hands and take a break. She popped into the bathroom and did the same. I walked out as she played with her hair and adjusted her sneakers and matchy-match workout getup. I gave up focusing on her as I was forced to pay more attention to my reps after realizing I had counted to 48 on the thigh machine instead of 5 intervals of 10.

On previous occasions I've seen her jump on and off treadmills and elliptical machines. The on and off is because she always spots a familiar face and has to talk about how much she hates cardio. One morning, she stood on a treadmill simply looking around and watching a video on her iPod. Luckily the gym was rather empty so it wasn't as if she was taking up a machine someone was waiting for.

It kills me for some reason that I can't figure this chick out. It looks as if she spends hours toning. She's super fit. However in about the ten times I've seen her, she has never once actually completed any sort of workout. Maybe she spends four hours there and as soon as I leave, she puts in serious effort. Even Hubs knows who she is. When he sees her on days I'm not with him he'll say over dinner, "Oh by the way, I saw the non-workout chick today at the gym and as usual, she wasn't working out."

Maybe she's a hired private investigator for someone with a cheating husband who works there as a trainer. Could she be a decoy of some sort? Could she be hired by the gym to make sure nobody is rough with the equipment? Could she be working for the mafia, spying on mafia dudes working out? They did tape several episodes of The Sopranos in my New Jersey town. For real. This happened.

Anyway, I wanted to take a photo of her for you guys, but chickened out - it's illegal you know. I think it is anyway.  As always thanks for reading.

Email ThisBlogThis!Share to TwitterShare to FacebookShare to Pinterest
Labels: gym, working out

I had to check out your blog just after reading the title - it took me back to my teenage days!

Glad to see it's also very entertaining as well. Am definitely going to follow.

Now about this photo...what if you take it from behind?! To be honest I've pictured her in my head anyway. Biatch!

Hi,
Saw your post inviting all to follow your blog on Craig's List. I am now a follower and invite you to follow my blog....It is entitled "A Work in Progress" and my user name is Conno59. Looking forward to reading and exchanging ideas. I live in California but see you in blogland!
Connie

@Rap, so glad you found me - I'm following your blog - looks great!

@Connie - thanks for joining me! Welcome, I'm already checking your blog out!

I'll tell you what it is. She goes to the gym to hang out, and show off to the cool kids in the cool gym. Then later she sneaks off to the ghetto gym where she's been a member for years working her @$$ off. She grew up poor but worked hard to get to where she is and now darn it, she's going to enjoy it!

Oh, and it's only illegal if you show the face without asking.

TS, you always make me laugh. My gym isn't really highfalutin! You are too much!

I think there is a special place in Hell for people like "non-workout chick"...I hope.

The only saving grave is that you've got two grey cells to rub together...and she, well, no. Nothing, zilch, nada!

Betcha if you threw water at her she'd melt too! (tee hee)

I always envy the hard-bodied gals at the gym. But usually they ARE working out. Maybe your "gal" is a gym junkie and gets her fix just hangin' out there. Thanks for dropping by my blog. Come back again. I like your blogging style so I signed up to follow you. I'm working on 50. Maybe you can help! http://www.boomerpie.com/

ugh. Hate the "perfect body" chicks that appear to never actually do anything. When I was working out I would spend over an hour on the elliptical, sweating my butt off (unfortunately not literally) and I'd watch these skinny chicks come in, turn on "Jersey Shore" on the TVs on their machines and "exercise" for about 5 minutes and then get off the machine, gab with their friends and leave.