OK, I swear this is the very last post you will read about Mario Lopez. This is really just a continuation of yesterday's post. I'll try to keep this short. I feel so nawsh from the antibiotics that all I can think about is getting back into bed.

Here it is... the moment you've been waiting 24 hours for. Mario Lopez at like age 12/13 penned this actual letter on lined paper from those big chubby pads where you yank the paper from the top. 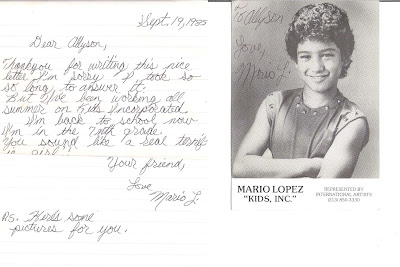 It's funny how much I adored a kid who had maybe two lines during his entire two year career with Kids Incorporated. I remember rewinding our VHS thirty times, repeating the short scenes featuring Mario dancin' and a prancin'. He was so very lovely. Dressed in various '80s fashions with studs, spikes and gummy bracelets - I envied his trendy style (I had no idea they paid people to make kids on TV look that cool). His dark, wavy hair was thick and perfectly sprayed atop his heart-shaped cutesy-utesy little boy face. He was every 12-year-old girls dream, yet since he got very little teen press back then, he was virtually unknown. I, of course, noticed him!

By the time Mario Lopez morphed into musclehead A.C. Slater on Saved By The Bell, I was into cooler guys. Real guys who didn't need to show off their muscles. Guys like the Andy Fletcher and Alan Wilder of Depeche Mode and Morrissey from The Smiths. 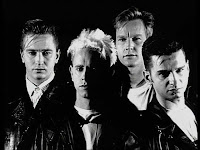 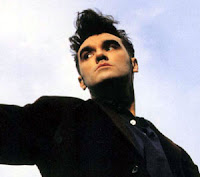 As a kid I went through a two year period where I fell for the dark haired, tanned boys like Ralph Macchio and gymnast Mitch Gaylord. I wonder if Mario knows he was really nothing special to me. He was just a summer crush back in 1985. Yup, Mario Lopez was simply one of hundreds of celebrity crushes I had throughout the '70s and 80s.

Mario, if you're up late one night, Googling yourself, and stumble upon this blog entry - know that I really appreciate you taking the time to write me a personal note. I believe the author of this note truly is you, because the other letter I received was in girlish handwriting - maybe written by an intern or your mom. I'm glad you've made it big as most child actors faded away.

P.S. Where the hell are the other guys from Kids Inc.? Whatever happened to Ryan Lambert and Jerry Sharrell - for a while, I thought he may have secretly become Perry Farrell from Jane's Addiction. 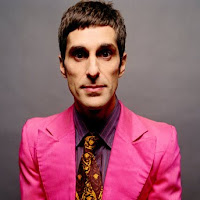 Had no idea he was in Kids Inc.

Yet another great post, thanks for providing quality reading material to a blogger who hates to read and write! (me)

omg Kids Incorporated! I have not thought about that show in ages!!! Good stuff indeed!

You are insane, lol! So many letters! I think I sent one fan letter in my life (and I'm ashamed to say who it was to)!

Got any Lark Voorhies stuff tucked away? I loved me some Lisa Turtle!

To all: Kids Incorporated was only the best morning show to come out of the mid '80s!

@RainyDaySaver - do you see now why I freelance write for teen entertainment mags? I was the biggest fanatic ever!

@ASBLACKASOBAMA - Sorry, I rarely bothered with the ladies. I do have a postcard from Justine Bateman and a childhood signed photo from Drew Barrymore when she was in ET. Stay tuned!!

Never heard of Kids Inc.... am I culturally challenged? Found the post very funny though!

I only knew him on Saved by the Bell and I didn't really like him on that.

Still I find it absurdly awesome to have a letter from him when he was just a kid.

Kids incorporated was my favorite!

Hahah! Mario Lopez!! I was never into him but I was certainly into the Alan Wilder and Martin Gore variety of boys, just like you!