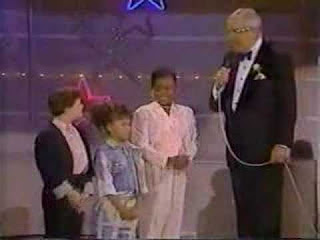 I never watched this as a kid but I wish it was still on from what I've seen on Youtube. The good old days before Simon Cowell :)

Of course I remember it. I'm old enough to have invented it, but sadly, I didn't. Loved that show and loved that comedian who was on. WHAT was his name? He had a one word name. Golly, that was a long time ago.

Star Search was one of my favorites as a kid and I wanted to get on the show just like you! Silver Spoons was another good one ;)

Might be you're thinking of Sinbad. I remember when he was on there. Rosie O'Donnell too.

Rich, Google it, sources say Arsenio hosted the episodes in 2003.

Oh yes! I was a huge Star Search fan and also had fantasies about being on the show myself despite the fact that I couldn't carry a tune to save my soul.

When people always say Britney can't sing, I point this out. Just because she sings CAK nowadays and you can't hear her voice for all the heavy breathing and squeaking, doesn't mean she CAN'T. She's got some pipes! :)

Oh, I loved these videos! I watched Star Search too. Thanks for the walk down memory lane!

i could never understand which was more: "X and a quarter stars... X and three quarter stars." i'd just wait to see who had the fake-happy-but-really-crying-inside face to know who was going home.

I totally remember Star Search! Thanks for the blast from the past!

I remember watching this show and wondering why they picked who they picked :/
Hubby had a cousin who sang on the show once, not sure how she did...guess she didn't do well if she only sang once....

ok, i LOVE your blog. i am pretty sure that we are the exact same age and were the same 10yr old. keep em coming.

Hey didn't Sinbad also get his start on SS? Loved the theme song, and the spokes model category.

I L-O-V-E-D this show when I was a kid and wanted to be on it so bad! Well, either Star Search or Solid Gold. lol

...and lost to a prop comic and later director of Kung Pow! Enter the Fist.

A very fun post, Ally! I used to watch Star Search, but it was quite awhile ago. I've never liked Britney, and this just confirms it. JT seemed pretty talented, though.

The original Star Search . Too bad Ed didn't hold on to the millions he gave away to unsuspecting home owners.

I loved Star Search too. Especially the stand up acts. I remember watching Norm MacDonald as a kid and thinking he was flat out hilarious. Turns out he was.

Cheeseboy, sorry, that was a typo - Silver Spoons was Jason not Justine oops!

I'm thinking we're the exact same age. I remember all of these things! You can imagine how EXCITED I was when I visited my great aunt's house and saw a picture of Erin Gray (the mom from Silver Spoons- KATE!) in her house. She is her stepson's wife. Did you follow all of that? Ha!

wow! I'd forgotten about this show. there were so many great talents on it.