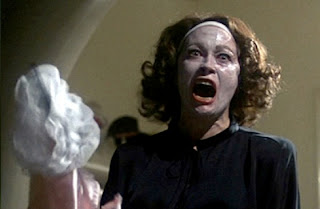 1981 was the year of many horror movies. American Werewolf in London, Friday the 13th Part 2, Halloween 2 and more. One horror movie, however, as a little girl one movie really freaked me out that year. Obviously,  Mommie Dearest wasn't meant to be an actual horror movie, but at nine, it was one freakin' scary-ass movie!

Based upon the biographical book written by legendary actress Joan Crawford's adopted daughter, Christina, Mommie Dearest portrays Joan as a raging alcoholic, abusive monster. She straps her adopted son Christopher to the bed every night so he can't escape, makes Christina scrub the floors at 3AM and beats her senselessly with wire hangers because $300 dresses do NOT belong on wire hangers from the dry cleaners.


Back then, I was captivated by little Christina (actress Mara Hobel) who appeared to be about my age. I feared for her. I cried for her. I wanted to reach into the film, grab her hand and run away with her. I wanted to take her up the safe haven of my bedroom and let her play with my Smurfs and Strawberry Shortcake dolls. I'd bring her a Whatchamacallit candy bar, some Trident, a bologna sandwich and a Hi-C juice box. I'd make it better.

As an adult, I've heard conflicting stories of the Mommie Dearest tales. Some say Christina greatly exaggerated and that Joan was a kind, caring woman who would do anything for her adopted children. We'll never know the truth. However, the movie images still haunt me and remind me of how afraid I was watching a little girl my age getting beaten up.

Where's Mara Hobel Today?
For you 80s trivia fans - Mara Hobel went on to play Charlotte Tilden, an awkward and naive girl on Roseanne.  Researching for this blog post, I learned that, like me, Mara Hobel has gained quite a bit of weight since 1981. She starred as Cynthia, a sassy New York City BBW, in the gay romantic comedy, Broadway Damage. As a chubster, I wanted to high-five her for still doin' her acting thing and I love this line: "Yeah, Dad, I lost a ton of weight, I look like f**cking Kate Moss!" I can't wait to rent the indie film from Netflix. How the heck did this little gem escape my keen indie-movie eye?

Wow this post is so cool! I remember freaking out when I first saw Mommy Dearest because I had seen "What happened to Baby Jane" before it so I thought Joan Crawford wasn't nutty but Betty Davis was nutty. I felt bad for Christina too. Even tho she did gain some weight she looks totally the same!! Good for her to still be acting!! I wonder if she ever kept any wire hangers in her house tho growing up...hmmmm...=P

This movie also scared the crap out of me and why I don't use wire hangers. I have big, sturdy plastic ones and nothing else.

Dude, American Werewolf in London though.

"She said to stay on the main road."
"Whoops."
(Howling in the background.)

Wow I have to say I love that movie. I have feared wire hangers ever since. No joke. I freak when I see them in my closet. I cried for Mara too. And then when my mom was being mean to me I always used to call her Mommy Dearest. She used to get so pissed.

I read that book when it came out and watched the movie, too. I'm a bit older than you though. I was 11 or 12 - still probably inappropriate.

I just read Possessed - a Joan Crawford biography. According to the author she was a wonderful, generous lady who was just a bit strict and into cleaning.

I had a lot of trouble with that movie, because as you know, I pretty much lived it as a child. I watched it, but it was very painful for me.
Still a great post! I love finding out what happened to actors later in life. thanks!

guhhhhhh! this movie (along with Whatever Ever Happened to Baby Jane?) has been a FAV since i was little. did you see my halloween post where i dressed up like joan?
http://thingsiliketoeatandothernonsense.blogspot.com/2010/10/get-ready-to-have-your-face-dazzled-off.html

i can't wait till i have a kid so i can dress it up like christina. boy or girl, i don't care. (i know, there's always christopher. but he didn't really "shine" the way christina did.)

Never freaked me out, I just didn't like it. Good for parody though. Cool where are they now bit too.

This movie pissed me off, I always wanted to smack the mom!

My mom and I love this movie. I still call her Mommie Dearest to this day and I give her wire hangers as a mother's day gift. Does anyone remember the parody they did on SNL back in the 70's where Gilda Radner played Christina? OMG that was a pisser.

The movie scared the shit out of me too. Mostly because I saw it when I was too young (sigh...I saw waaayyy too many horror movies too young) and I got so scared Mommie Dearest was going to come after me at night...

So glad to meet you! Thanks for visiting my blog today, I am now your newest follower!

I hate to say this but my Mother (especially the bathroom scene) in this movie is EXACTLY like how Joan Crawford was. That is the reason she and I do not have a relationship today!

Oh how I remember that movie! Made me never want to use wire hangers again. I also remember that Christina was all over the maginzines after the movie came out. Thing I remember most is her brother never confirmed or denide the stories. Seems like he would/could/should say something...

Would you believe I have never seen this movie? I think I want to now!

No Wire Hangers...EVER!!!
I love Mommie Dearest. Fayne Dunaway was awesome in it. I loved Mara Hobel in it- she was adorable, but I hated it once they had grown up Christina, Diana Scarwid. Bleh

Loved the movie and all the wire hanger references ever since. Carson in Queer Eye loved to shake wire hangers at the poor straight guys and scream like Mommie Dearest - LOL! And yes, Gilda's spoof was hystercial!

Also love American Werewolf in London - watched it over and over, always felt so bad how it turned out.

Sometimes the most scary movies were not always meant to be that scary.

I remember Watcher in the Woods freaked the crap out of me. Doubt it was supposed to do that.

I have not seen Mommie Dearest, but given that I hate horror movies, I doubt I will.

I had plans to read lots of blogs but now I must go on a Joan Crawford Google hunt. Thanks a lot! :)

That movie came out around the same time I did a presentation on Joan Crawford for class performance. I was too freaked out by hearing about it, I didn't dare see it.

PS Thanks for your recent visits, Ally. I hope you're well.
Hugs,
xoRobyn

I love this movie and yes, it is scary! I've read the book too and would love to know what truly happened!

I remember Mommy Dearest. I've seen the movie and read the book. The mother was a Nutter!!

Thanks for the flashback.

I should totally re watch this- thank for reminding me- I was young when I saw it- probably too young!

Gosh I remember that. That wire hanger scene is burnt onto the back of my brain!

This probably makes me crazy, but I love that movie. My mom and I quote the hanger scene whenever we A)hang up clothes or B)are wearing face masks. It's a classic.