550-TEEN Before Chat Rooms, We Had Party Lines

Back in the 1980s, we teens didn't have AOL chat rooms like the 1990s kids. We had what we called party chat lines. Typically the following commercials for a particular teen party line aired during our after school specials. 550-TEEN cost a hefty fee for that very first minute. Why? Because most kids probably panicked and hang up--they needed to nail us within that initial 60-seconds. After the first minute, the call would run about 10 or 20 cents each additional minute. 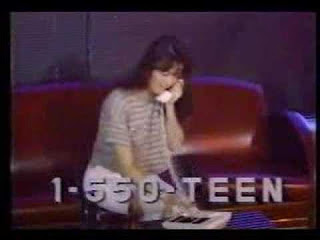 In 1986 I remember being at the home of a bad girl's house in South Valley Stream, New York. As you know I was kind of a good girl. I don't recall how I actually met this "bad girl" friend. I have a weird feeling it was at Hot Skates, the area roller rink. As a Catholic school kid, I rarely crossed paths with the public school kids. I'll call bad girl "Gina",  although I honestly do not remember her name. Our friendship was that short-lived.

That year we loved this new rap/rock group, The Beastie Boys. We'd play their Licensed to Ill tape over and over on her boom box. She was a tough-talking Italian girl with big hair and dressed more grown-up than I did. I was just a silly, goofy, immature Italian kid, nothing like her. I had crushes on boys. She dated boys. 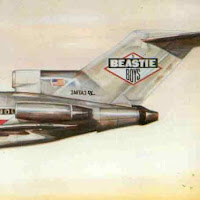 One day, I told her all about a commercial I had seen for a chat line for teens to call and meet boys. She was stoked to try this out and with her hardworking single mom busy at her second job, Gina was up for some chatty chat. Gripping the corded, beige, kitchen phone, I watched as she banged out 5-5-0-T-E-E-N as quickly as her long, hot pink nails could "dial."

We didn't have the speaker phone option on our home phones back then, so she instructed me to pick up the phone in the other room to join the chat. Within several minutes she was connected to a handful of young locals.

Everyone was talking over each other yelling in thick Long Island and Queens accents, "Who are you?" and "Where are you from?" Names flying back and fourth, girls and guys yelling out their numbers "My name is Mike and this is expensive!  My dad's gonna kick my ass! Cawl me on my home phone!" or "John, call me, I'm Jenny, 14, from Commack, my numbah is 876-4321."

Long story short ... Thanks to me, Gina became tight with dozens of party line boys and began serial dating. She no longer had time for me and I wasn't really ready or allowed to date, I was barely 13.

Today I tested 550-TEEN and my call could not be completed as dialed. I dialed 516 (the Nassau County, Long Island area code) + 550-TEEN and the number is not in service. To this day, I wonder what my folks thought when they saw the phone bills. I don't recall anyone questioning me.

I totally missed out on this. I was around in 1996...I just never knew about this. It sounds kind of awesome, though.

That's more dangerous than Facebook. There must have been people murdered through that service.

I LOVE your memories. What a great blog...

Don't remember this one either, but I'm guessing they didn't have the service in Canada...LOL.

Oh I wish we'd had something like that. I'd have given anything to run up my parent's phone bill like that. I think I was 17 in 1996 but I was still taking great pleasure in tormenting my mother :-)

ScoMan, I never remember any news stories about it, but it's possible.

my bff's home phone used to get crossed with a local party line. it was like an instant party in my pants.

i was also way too catholic (nerdy) to be interested in any of the dating lines. i was more preoccupied with the possibility of calling a 976 number and speaking with santa claus.

Everyone always talks about Party Lines and I am sad that I missed them. I used to go into chat rooms just to bother people lol doing it on the phone would have been much more fun.

Girl, when I was that age, a party line was actually sharing your phone line. Ours was with the neighbors that lived behind us. I used to love picking up the phone and listening to their conversations!

Thankfully, when my kids were younger, I had no extra charges on the phone bill, from this stuff.

LMAO I totally remember those, even though I was only 6 that year. xD I used to wish that I was popular enough for such things, but that dream never came to pass. (Thank GOD!!) LOVED the story of your party line origins!!

so the service probably actually 'aved' you from a lot of further trouble with Gina, lol. I'm a child of the 80's (or teen of the 80's) I vaguely remember these lines.

I don't remember this either.....
Maybe it was only up east?

I was never brave enough to try this. My folks would have flipped!

Haha! I barely remember this. I do wonder what your parents thought though.

I'll admit it, I called that chat line a few times. I actually met some cute new wave dudes from Baldwin thru that thing!! Your Beasties shoutout made me smile.

Used to pick up the phone, and dial 411. There was a recording about hanging up and dialing the number again, but there was a long pause in-between. A lot of us would chat during that pause.

We made our own chat line. And it was free!

Wow, I remember these lines! A friend and I called one once in the 5th grade, we got so busted by her mom. LOL

I totally remember these party lines! You know what is crazy? I was up past my usual bedtime a couple of nights ago...not too late...like maybe midnight. This commercial comes on for...

Not even kidding. You log on or call the number on the screen to hook up. Ew.

I do have a vague memory of that service, though I never called it.

I also did something similar to 1950s Atomic Ranch but I can't remember exactly what...

Hey is the girl in the ad Alice from People Under The Stairs? If not, she looks a lot like her.

@Moon - I don't think I've ever seen that movie, now I gotta Netflix it!

Yet more proof that hormones are dangerous little suckers. Your parents must have been extremely understanding, my mother would've cut off my ears, or something.

Haaa! You bring back the best memories of everything for me. I never called it, but I do remember it. Hilarious.

Do you remember that After School special with Helen Hunt on PCP? And she throws herself out a window? To this day one of the funniest things I have ever seen.

I don't reallly remember this. Unfortunately I do remember the psychic hotline because my roomate at a travel/business school in Pittsburgh in 1989 used my phone for this without me knowing and never paid me for it so I got stuck with the bill - I think it was between $70 and $80.

I remember seeing those commercials and was jealous of the cool teens who were able to talk to eachother on the phone...I lived in the country so I was severely friend deprived before I could drive.

My sister got into so much trouble because of this....

I thought of you last night because Ralph Macchio (Who looks like he is 16 still) was on TV saying how much he loved the new Karate Kid movie and how the kid looked like he could kick his butt!

OMG I rememember this as well. I actually met someone like this. I was expecting a beast but she was very pretty.

One I do not remember!!

I had a friend in sixth grade get into some serious trouble for running up those bills!

Ooh, I remember back around the time when everyone was sharing and borrowing copies of "Are You There God? It's Me, Margaret" we always called 1-800-TAMPAX or whatever it was to get free samples.

Why we were so obsessed with getting our periods is now beyond me (if I knew then what I know now!!!) but we would call and have samples sent to everyone's houses, just because!

I don't remember the party line stuff, but wooo boy, do I remember those first early days of online chatting.

I was always to chicken to call. Probably a good choice. I would've been in deep do do.

One of my first thoughts was about a pedophile calling that hot line and stalking some unsuspecting kids. I have a sick mind.

You're lucky your parents didn't question it. I had several friends whose parents killed them when they saw the bills.

I lived in this one place in Canada for awhile that still had the old fashioned Party Lines (as in the entire street was connected) somewhat running. They had tried to separate the connections but if you listened carefully, you could hear full conversations in whispers.

I'm amused at how melodramatic the girl in the commercial is.
I guess back then, the risk was murder at your parents' hands. Now, it's at a stranger's. The old fashioned option seems better.
xoRobyn

I remember those ads. My mom would have kicked my butt if I'd called.

As for the phone numbers, it sounds like a precursor to those 900 numbers people 'secretly' call today.

omg!! my friend maggie and i would call the 900 party line numbers and pretend we were 18 when we were 12. ahahahahaha!!!
then we'd blame it on her sister when the phone bill came.
oops!

Does anyone rmember "loop lines".