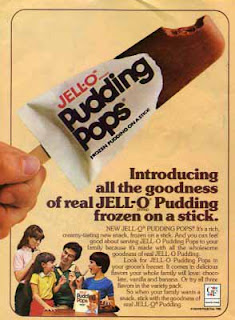 Back in the early 1980s, JELL-O Pudding Pops were the perfect treat. For whatever reason, these "frozen pudding on a stick" treats somehow fooled Mom into thinking they were healthier than ice pops.

Kraft / General Foods JELL-O Pudding Pops came in a variety of flavors including chocolate, vanilla and fruity gelatin flavors. Every time I reached for one, I could hear Bill Cosby's voice in my head reaffirming their goodness. Did you know he was a JELL-O spokesperson for 30 years?

You may recall a mysterious fifteen or twenty year absence of JELL-O Pudding Pops. Here one day. Gone the next. Around 2004, Popsicle brand began marketing and selling JELL-O Pudding Pops--if you ask me, they're nothing like the original. Why? 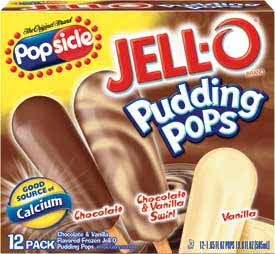 I love your description of the "sandpaper like substance (super healthy, I'm sure)." It did taste like sandpaper. But the popsicles were definitely yummy. I had a preference, of course, for the chocolate ones.
Be well, Ally.
xoRobyn

Ahh...as with everything else, things get smaller over time.

I seriously have issues with those wooden popsicle sticks. They leave a woody taste in my mouth. (oooh...that didn't come out quite right, did it?) Seriously, whatever happened to the cool PLASTIC popsicle sticks...you know, the ones you could build things with! (Yeah yeah, the environment. I know!)

I vote Jello. They tasted better - flat out. But are they still Bill Cosby's? I mean, they still exist and Bill Cosby is still alive? Does he get no credit for them anymore?

Mmmm... I haven't had a pudding pop in years. I know the Popsicle sticks you speak of. Those were awesome. You lick it wrong and a shiver would run up the nerves.

I've never had one of those. They look nice though.

I agree with you 100%! I loved those fruity gelatin ones. I would love to have one of those today.

As a fat kid though, I was more into stuffing my face with actual pudding than pudding pops.

Now-a-days it's all about the suction. Twice the effort, half the calories, and its a marketable skill.

The pops look good, but I can't stand those wooden sticks...when I drag them through my teeth to get all the residue off them, the feeling just drives me crazy...like fingernails on a chalkboard.

I loved Jell-o Pudding Pops. I can still feel their odd, icy, pudding-y consistency. MMM...now i want one...

Loved p-pops. Even the Cos commercials were da bomb. I also so know what you mean by the wooden stick thingy.

LOL I used to like these as a kid. and youre right the ones they advertise now are nothing like the original. But to be honest, WHAT IS ANYTHING LIKE IT USED TO BE??

I was obsessed with the original pudding pops. I loved them. I scarfed them down like nobody's business!

Oh lord, I used to LOVE the fruity ones. I would commit questionably legal acts to get my hands on a box of those.

yeah the old ones were so much better!

Haha! You are so random I love it! I haven't thought about these in years. Seriously, you bring back the most random memories.

It's funny cuz I remember the old sticks having sandpapery consistency too!

no way haha i've never heard of this! i love choc pudding but jello is much better to me...depends on the mood i guess

i can still remember that fudgesicle-like consistency of the originals. thanks for the virtual taste test, ally. :)

What I would't do for a vanilla jello pudding pop right about now.. damned diet

I think these came 6 to a box and with the 5 of us kids they never lasted long in our house. I don't think they even made it home from the grocery store!

I don't remember having either pudding pop. We might have but I do remember that we loved Fudgesicles. I hadn't had one for at least 15 years until last week when I got a box of Blue Bunny brand on sale. Yummy!

As far as I know we've never had those in the UK ... and I'm starting to feel a little bit cheated and a little bit miffed about it now.

I miss these! I love the icyness on the outside of it. Where did they go?

Why do they change stuff like this? Another thing that just isn't the same anymore is the creamsicle. Man, those used to be soooo good. But now they don't really taste creamy, just sicly.

I want both of them, I want them now!

I want pudding pops! And Bill Cosby makes me want them more! I love Bill Cosby!

I am so getting some pudding for tonight!

You watched the Cosby Show, right? I can still watch that show and laugh out loud multiple times during each 30 minute episode....

Wow, I remember the old school Pudding Pop's and the Cosby commercials. They were so great. A real treat as a kid growing up.

It sucks that the original was taken away and we are left with nothing but a sad imitation.

The third flavor (see the print ad in the beginning of the post) was banana. It was my absolute fave!!! Thanks for remembering how awesome they were :)

yes yes yes
i loved them... and i so remember the wooden sticks.. ha ha
good times...

my grandparents always had a box of pudding pops in the freezer for when we came to visit. we must not have visited them very often because they was always a thick crust of ice crystals to eat through before you actually got to the puddingy center! i actually didn't even know they still made them!