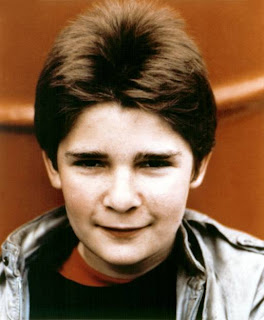 If you've been following me for a while, you know all about my love for Corey Scott Feldman. Hell, I've only mentioned him in about maybe six out of about 155 blog entries, so that's not too obsessive, right?
Anyway, so here's the deal. My BFF blogger Jesse at Not Worth Mentioning tells me about this awesome video he just got his hands on featuring my childhood fave, COREY FELDMAN. 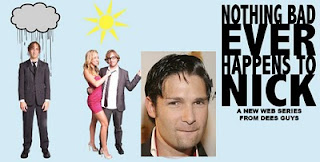 The YouTube video is a Dees Guys production about, well, dees guys Nick and Michael. Nick and Michael are two young dudes doin' their TV production thing in Hollywood while mackin' on girls, chillin' with friends and whatnot. Kinda reminds me slightly of the boyish humor stylings of It's Always Sunny in Philadelphia.
Their sketch comedy web series Nothing Bad Ever Happens To Nick is hilarious and can be viewed here on YouTube. I think the Nick character is pretty freakin' skater/indie boy hawt and Michael is too, but in more of a scruffy Luke Perry way. It's easy to relate to Michael having that friend who has nothing but good luck in every sense of the word.
OK, so here's where Corey comes in.
In this one particular Dees Guys episode (view it here) Corey Feldman is the all-knowing advice-giving guy Guru and that's when it hit me. My childhood crush has matured. I've moved on from wanting to make out with Corey Feldman to wanting to just do coffee with him or maybe check out some cool vintage clothing and record shops together downtown.

To be honest, I think this vibe may have developed prior to the Dees Guys episode of Nothing Bad Ever Happens to Nick. I think it struck me possibly while watching The Two Coreys, his reality show with the dearly departed Corey Haim (so sad).

As a kid, I had this massive crush on Corey Feldman, not really knowing how else to feel about this cute Bad News Bear who went on to portray the adorable kid-next-door in Gremlins and funny friend in The Goonies.
In fact just the other day Erin at Blogging is for Dorks talked about this. As a married adult, you don't want to "get" with these celebs in the biblical sense, you just wanna sorta be their friend.

So here here my message to Corey Feldman:

Corey, today I'm 37 and married. Friendship is all I can now offer you and I'm sure you're beyond okay with that. Maybe even extremely relieved and breathing easier.
One thing I will always hold dear is my personal letter from you, old pal Corey Feldman.That's one thing marriage and maturity will never take away from me.

Do share, Ally, when you and Corey are done with the coffee and chatter. I'm not married, and he's aged quite nicely.
Cheers,
Robyn

Sounds like a larf, I'll have to check out the video. You know, I'm beginning to sense a theme on your blog. You like this Corey fella don't you?

Don't you and your husband share a list of ten celebrities you can 'get with in the biblical sense' if ever given the opportunity?

As I have gotten older I have gone from the wanting to mate to wanting to just meet celebs. Just doesn't seem as cool as it was when I was younger.

I think his life would be enriched if he took you up on your offer :)

I loved him in The Burbs!
(which happens to be one of the few Tom Hanks movies that I can stomach).

I concur. This is a really, really funny series. The one who plays Nick is hilarious! I know it's early, but I think Corey should be nominated for a Weby – if such an award exists.

What a fun blog you have! I am enjoying it immensely, and catching up with the 80s - my golden years, hee hee - being in college and grad school and living in all sorts of cool places. And, of course, loving MTV.

I would like to double date with you and Corey. I'll be bringing Jim Halperin.

I liked Lost Boys. That is my favorite Corey Feldman movie.

Ok with my obsession for AIC who am I to judge someones obsession. LOL! I say married or not you can still fantasize...is that wrong? I am not sure, never been married.

There were two celebs that I was *madly* in love with as a kid. One was Ray Milland, who died (from old age) around the time I got my first bra, the other was Charles Shaugnessy who played 'Shane' on Days of Our Lives, though he was more famous as Maxwell Sheffield on The Nanny. Your crush seems so (SO, very) much more logical than mine.

I happen to love It's Always Sunny in Philadelphia! It is beyond crazy and fun!

I hope you get to hang with Corey someday!!

I remember reading Tiger Beat and thinking he was cute ;) So 80s!

I was definitely more of a Haim girl myself but always made room in my little ole heart for Feldman! lol and you're right, there is a changing of relationship there. More coffee, less love. lol

You know what would be awesome, if Corey followed your blog.

Lunchables are always the answer to girl problems, doesn't everybody know that. Corey is the man. Go The Goonies!

I think my childhood crush has fallen off his rocker so much that I wouldn't even do coffee with him. But you are right it is funny what a little life experience gives you! Although I love that Corey Feldman wrote you. Something you will always have!! ;-)

Okay, with your love of Corey, perhaps you can tell me the title. A long time ago in a galaxy...or at least a city...far far away, my girlfriend at the time and I watched some Corey movie, either him or the other Corey, where he was in a bike crash that sent him back in time...weird movie, not much to go on, I just remember the bike wreck...any idea what the title might have been?

oh, and hope you enjoyed Alice if you went to see it

he was kinda of a dick when I met him.