The Suckiest Music Student Ever

OK, I'm about to let you all in on yet another whopper of a secret from the old days. Don't ask me why I'm doing this. I don't even know exactly who is reading this. I guess just call me the open book. Now don't fret, if you've told me a secret, I assure you I won't repeat it here or anywhere else. I promise! 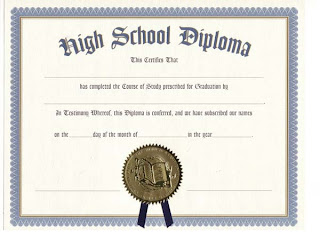 So truth be told, I wasn't the best student. Don't get me wrong, I tried. My parents tried. I am forever grateful to my private math tutor who helped me pass the Math Regents. I am also very thankful to Miss Vicky Cooper who helped get me through the American History Regents. All of those days staying after school with a handful of kids, going over the material in "extra help" sessions... ugh!

I wasn't that kid who just cracked open a book for five minutes and got an A. It took hours and hours of studying, notes on index cards, tutors, extra help sessions, you name it - just for me to nail a C+ or B. I remember some dumb-ass dude. He failed and cut class like every day and the day we found out our SAT scores, he announced how he took the SATs (just for fun I'm guessing) and got a 1200 on his first shot.

The keyword here is Regents. I have no idea how it works in a New York high school these days and I'm feeling way too lazy to research it right now. However, I do know that in order to graduate with a Regents diploma in 1990, I needed to pass three math and three science, in addition to a language and history Regents senior year.

Entering senior year, my folks and I were concerned because I was so painfully awful in math and science. I blame Mrs. Thom for my math anxiety. She was my 3rd grade drunken freak of a teacher at James A. Dever School (sorry if she was like your fave teacher, but she sucked ass!) That year was the turning point where my parents yanked me from public school with my head spinning. I didn't even have a uniform yet! I also blame my catholic school teachers for those damn "times table races." My stomach still hurts as I break a sweat thinking about racing to get all of the times tables correct on the chalk board. I still stall when multiplying 8x7 and 8x9. Don't ask.

Back to the Regents... My parents were concerned that I wouldn't be able to swing a Regents Diploma because I sucked so badly in Math and Science. I'm talking sucked to the point where I had to attend summer school in order to pass the Bio regents. It was horrible.

Yet I loved English class and wrote for the school paper. Like how many students sing in chorus and write for the school paper, yet are stuck in summer school? Not many. It was like I was a retarded nerd or something. I think that's why I loved the movie, Rushmore. I was so much like the main character, Max. In addition to having crushes on the unobtainable, I would have kids signing petitions. I would write silly editorials about how the halls were too crowded or how they wouldn't let us have caffeinated soda yet sold chocolate which has caffeine in it. I started a "Student Awareness Club", yet I couldn't pass a state math exam :( 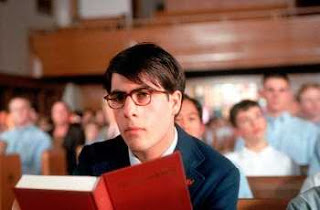 My guidance counselor (who by the way was so ancient, he was my mom, my aunt and my uncle's guidance counselor) let us in on an alternate route secret to securing a New York State Regents diploma - as opposed to a regular diploma. I don't know what was wrong with a regular diploma, but I had to have this special Regents diploma. I just had to. My future college career depended on it.

A secret way to bypass the 3 math and 3 science exam rule ... Because I took Chorus and Spanish for three years plus Humanities, all I needed to do was sign up for one Music Theory class. Gulp!

Upon day one of catholic school, it was mandatory to sing in the glee club. It was basically part of our daily routine and I actually enjoyed it. In fact by 8th grade, our music teacher told me I was the strongest Alto. Note: I was also the fattest, so it pretty much made sense that I was the "strongest". Ha ha.

Somehow I had squeaked by year after year without ever having to actually read music. I took piano lessons for like two weeks and hated it. In first and second grade, I attended the summer rec program. It was there that they forced us to play the Flutophone. Man, I hated that thing. I sucked at it because I think you had to read notes.


Sick to my stomach with the thought of having to take an actual music class, I consulted with my BFF, Scott. He was the school's musical genius. He was a true whiz. He knew notes and music stuff like nobody's biz! I somehow convinced him to take the class with me. It was actually demeaning for him to sit through. He could have actually taught the class himself, but he did it for me, his friend who really needed his support.

I'll try to speed this up for you guys. I sucked in that class. I sucked so badly that I probably would have done better in Chemistry and Trig! I couldn't do it. It was like totally Greek to me. I would try to cheat off Scott and the metal dudes who sat next to us. By the time June rolled around, I was a mess. I think I had like a 65 average which was bringing my GPA down so badly if you can believe that one. I actually had made the general honor roll more often than not.

As the final neared, Mr. Fiddler, our teacher must have known there was no way I was going to pass. I mean, I was struggling every day not to break down in tears. Horrible torturous moments of having to go up to the piano in front of the metal dudes and hit a few notes. I would sweat and tear up. It was so stressful.

The day of the music theory final I did something I never thought I'd have the courage to do. I pretty much broke it down to Mr. Fidz. He had known me for three years as a fairly quiet, good kid in his chorus class. I was never late. I never talked back.I was polite and respectful. I always got good grades in chorus. I confessed to him why I had put myself through this shitty experience.

With perspiration pouring off my head, a sick stomach and my dyed hair glued to my slimy forehead, I stood in front of him at the front of the class. Soaking wet final paper shaking in my anxiety-ridden, sweaty hands, I somehow squeaked out the story about how I desperately needed a Regents Diploma and the only thing stopping me at this point was this class. I promised him I'd never take another music class in my life ever again. I told him of the shame I felt for not being able to succeed in music. I mean, I loved music and still do. Concert-going was big for me for many years. I often wrote music reviews for the school paper and then later on for websites and magazines. I mean, I was a major music buff, but just couldn't read or play a note of it.

Mr. Fiddler was an older teacher, he was very serious and totally old-school. He was tallish and slender. He had perfect posture, wore a different colored turtle neck every day and glasses. He kinda reminded me of what my Italian grandpa would look like if he were German because Mr. Fiddler pretty much looked like a grandpa. Not the kinda grandpa that played with a Whoopee cushion or gently tapped your grandma's bum with a wooden spoon to make you smile, but a stern kinda gramps. The kind you behaved in front of.

He didn't give me an answer that day. He didn't tell me not to worry or wink and say, "No problem kid, I got ya covered." He just nodded and I ran out of the classroom as fast as my Docs would carry me and cried like a baby outside of the building somewhere. 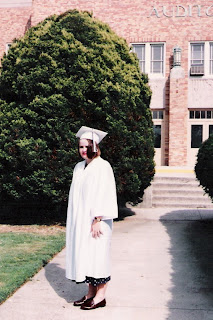 With a knot in my stomach, days went by before graduation. I honestly feel that I didn't know how shit turned out until the very day we lined up in our unflattering white gowns with that ridiculous cap balanced ever-so stupidly atop my budging, sweaty head. My diary entry for June 23, 1990, "I did it, I finally graduated. This was so hard and it was only high school."

I passed. I loved him. He was my hero of Central High.

Ironically, a Regents Diploma doesn't mean crap outside of New York State. When applying to schools in New England, I discovered they all wanted you to have a certain amount of math and science classes anyway. So yeah, I basically put myself through that awful experience for nothing, but it made a decent story to blog about one day.

As always, thanks for listening and please don't report me. Seriously.
at 10:03 AM

I can identify. I was always good in English but completely lost in math. At least you have the guts to write it out for the world to see. Sucks to Archimedes!