Show Me The Money!

This weekend our area was hit pretty hard with snow. The total accumulations range from about 4 inches in Westchester to 2 feet in South Jersey and Long Island. Sure it looks pretty, but yesterday some folks on Facebook and Twitter were commenting about the cleanup. Folks over 30 want to know, "Where are the kids looking to earn a few bucks by shoveling their neighbor’s driveway?"

I've noticed this trend since the late '90s actually. I was still living at home and my brother and I would help shovel my mom's walkway and driveway as well as the old lady next door. I'd moan about how when I was a kid, I'd do the entire block and come home sweaty and beat, but with almost $100 in my pocket. The kids on our block were all grown up and had real jobs now.  Driving by, we never saw youngsters shoveling.

We're left wondering... What's the deal with today's youth? Is it just a New York/New Jersey thing? Is it due to all of the newer tech distractions such as way better video games, the internet and text messaging? Could it be an increase in allowance? I only received about $10 a week and tapped out at $20 a week once I was old enough to earn my own spending money. Could it be an increase in school work? I've heard news reports of students receiving much more homework than we did in the '80s.

When I was a kid, all I ever want to do was earn money. When I was sixteen, I even wrote an article about it for Seventeen magazine. Unfortunately although they paid me for my submission, they never printed it. I was crushed, but what can you do. 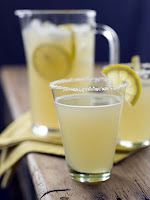 For years, I ran lemonade stands in front of our house - it was the only benefit of living on a super busy street. When I wasn't selling lemonade, I was running small book and toy sales on our lawn - again cashing in on the traffic. In the end, I found the lemonade garnered the most income.  There was once a sweaty guy doing construction on the house across the street. He popped over to my table holding a big Tupperware tumbler. He handed me $5 and asked me to fill it up. It was so amazing, I decided to close up shop and took the rest of the "work day" off and enjoyed a swim in our yard.

By the age of twelve, I had a busy babysitting schedule which included most of the little kids on our block and my cousins who lived around the corner. It occurred to me that there were so many small children on our block that I could actually run a daycare program in our basement.

Grudgingly my parents gave me the OK, though my dad was concerned about his home owners insurance. I promised I'd keep the kids in the basement and not allow anyone near the fenced in pool area. He agreed and "Allyson's Day School" was open for biz and survived two successful summers until I outgrew it.

I had approximately ten students, including my little brother and maybe my cousins - I'm not sure. I organized each day to include a drawing hour. I had the kids draw something based on a particular theme, "Today you must draw a picture of your favorite animal" or "Today you must draw something square-shaped." Snack time was every day at 11 AM. I would serve happy youngsters Pathmark brand fruit punch and a handful of cookies or pretzels. I would read them a story and we'd play different educational games. To spice things up, I held special events like "Skit Day" and "Sports Day" which included different obstacle courses and ribbons I made for the winners.

I never charged much, but babysitting and the day school helped support my teen magazine and TOPPS trading cards addiction. It seemed as if I were always collecting ET, Gremlins and The Goonies cards. I swear there were some cards TOPPS either only made one of or seriously made NONE of. I owned hundreds of cards, yet never a full set. There were always a bunch of cards missing.

By the age of 15, I was looking for real cash. I became obsessed with Esprit and J.Crew clothing and my parents were far from pleased with the price tags. Mom felt you could get an equally nice sweater from Sears or Penny's, so it was up to me to get out there and increase my cash flow.

Too young to work legally, I didn't want to deliver papers and sure, babysitting was quick and easy money, it simply wasn't enough. Most people were paying me a $3 an hour at best (according to my diary). Then one day, my dad introduced me to the dirty underground world of catering. Apparently, these family-run businesses didn't always follow the employment laws the way big retail outfits did. They'd sometimes overlook your age and eagerly put you to work. It sounded too good to be true.

Summer of 1988, I gave it a shot and paid a visit to our local wedding hall. The joint has since changed hands several times, but still exists as The Sand Castle. Walking distance to our home, this banquet hall was the best summer job a kid could have. I was too young to drive and didn't have a crazy social life on summer weekends since we were home all week anyway. I figured, what the heck. I could have my fun Monday-Thursday and kill myself Friday-Sunday earning a quick $150, plus tips.

The job sucked, but I kept it up until senior year. I would never recommend this work to anyone I actually like. It was exhausting and newsflash, people do not tip at weddings! At fifteen, I had only been to maybe two weddings. How the heck did I know? I was a sucky waitress, which meant I was often assigned to the band and photographer table. Luckily, those guys tipped. The bands would say, "Here's $20, keep the pitchers of water and soda coming." I thought, "Hey, you got it!" I think I even dropped off extra food "by mistake".

We'd work our asses off all weekend. Long 10-hour shifts that seemed never-ending. A reception is only 5-6 hours but we had to set up, clean up and sometimes set up for the next event. They worked us like dogs and treated us like garbage. It was the first time I was ever referred to by my last name on a regular basis. Dealing with drunken jerks demanding an extra serving of Prime Rib or people complaining that the Bride and Groom were too cheap to offer Fillet Mignon was the worst.

It's ironic that I'm writing this blog post now. Here I sit in my sweats, sipping tea as I delay my daily online job hunt. Laid off and looking to New Jersey to send me my generous $530 check each week to help pay my rent. Trust me, I'm not complaining about that amount either. It's much better than possibly any other state in the country. Just a bit funny when I look back at how hard I once worked at a time when people said to just kick back, relax and be a kid.

Where indeed are the entrepreneurial minded youths today? When I was a kid I actually went door to door selling flowers from my mother's garden. At a quarter a bunch, I made a killing.

On the pathetic note, I saw on the news all the white stuff part of the country received, and for a few seconds actually felt envious of shoveling snow.

We used to chop and sell kindling wood around the neighbourhood in the days of open fires.

Yes, getting the snow shoveled has been a problem for many years. My mother used to do it until her late 70's because she coudln't find kids to do it. I worried long distance all winter long.

I like the title of your blog. When my kids were younger I read all the Judy Blume books right along with them. In fact, I still have them.