Gone But Not Forgotten: My Favorite TV Shows

My friends are addicted to shows like Dancing With The Stars, American Idol, Lost, Dexter, etc... For some reason there are very few shows I fully enjoy watching. Sure I never miss an episode of Hoarders or The Hills - don't ask me why. I'll admit, this isn't exactly quality television. But for some reason, the older I get, the more I feel as if nothing compares to the old sitcoms I loved so much growing up. 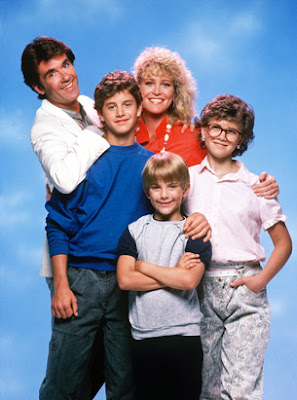 You've probably heard of most of the following shows, depending on your age or if you have TV Land. Growing up, I was a serious TV addict. I remember watching The Partridge Family and The Brady Bunch in reruns summer mornings before heading out to the pool.

Every weekend, I couldn't wait to catch the line-up of family programming. Fake families with multiple siblings (I only had one brother). Families that had lots of money or parents with interesting jobs -- they were always writers, journalists, TV show hosts, psychologists, caterers... TV parents that could solve a serious issue in thirty minutes. Parents and kids that said super clever and witty things. None of us talked that way or had cool comebacks like they did. Those families dressed fashionably trendy. TV moms and dads were always sneaking in a passionate kiss when they thought the kids weren't looking. The kids would react yelling, "Gross!" I don't remember that happening in our kitchen, ever!

My love of TV began to die down significantly when the internet first came into our house. That's really what finally put the kibosh on my addiction to the tube. But before the early '90s, look out - my ass was permanently planted in front of the TV and there was nothing my folks could do to change that.

TV made sick days and snow days all the more special. There was nothing like catching a show that I wouldn't normally get a chance to see if it aired during school hours. For example, I remember around age 11 falling in love with The Courtship Of Eddie's Father. This old show was based upon a movie and has a fun theme song that's still popular today. The show ran from about 1969-1972 and starred Bill Bixby, whom I really liked from The Incredible Hulk. I loved the simplicity of older shows. The clothing styles and the way the actors spoke much more theatrical than they do now. I was home sick for several days and the one thing I missed about going back to school was that I could no longer watch my new favorite old show.


Snippet of an episode of The Courtship of Eddie's Father.

Specials were also awesome. They were only on during holiday time and the networks had a special song and graphics they showed before airing that Charlie Brown holiday special. The anticipation was unbelievable to a child.


The cool CBS intro which typically aired before a special holiday program.

There was one really stupid television special I liked. I don't know why exactly, maybe because it featured all of my favorites in one program? It was called
Battle Of The Network Stars. I think this must have appeared on weekends or evenings, because I remember watching this with my grandparents the one year we lived with them while my parents were house hunting. I loved watching my favorite '70s stars competing against each other in physical challenges. I guess today's version is MTV's annoying Real World vs. Road Rules.


Melissa Gilbert is no match for Kristy McNichol!

In first grade, I was a big fan of Eight is Enough which ran from 1977-1981. The show was based upon an autobiography by a journalist named Tom Braden who was the father of eight kids. I had a huge crush on Adam Rich, even though I was only six. I never missed an episode. I loved the theme song and the show made me wish I had seven brothers and sisters. It's sad because years later, E True Hollywood Story revealed that nearly all of the Bradford kids had drug and alcohol problems. In fact, one of the big sisters died from an overdosed years after the show went off the air.


Family Ties was a special show in a variety of ways. Yes, I watched it in the '80s. I loved the theme song -- I typically love all theme songs! Family Ties was different in that I didn't find any of the actors good looking, but that was OK. Family Ties will forever have a memory for me later in life. When I first began dating my husband, we would watch it over the phone together. He'd watch it in NJ and I'd watch from my tiny NYC studio apartment. When we were planning our wedding, I asked if we could do our first dance to the theme song. He said no.

Other shows I loved, in no particular order, include: Silver Spoons (ahh Jason Bateman), Alice, Too Close for Comfort, Spencer (ahh Chad Lowe), Facts of Life, Kate & Allie, Mr. Belvedere, Punky Brewster, James at 15(a '70s show), Little House, Growing Pains (ahhh Kirk Cameron!), Diff'rent Strokes, One Day At A Time, Gimme A Break, Alf and so many others.

i was a big fan of What's Happening? The theme song is awesome. But I have to say that Family Ties is an all-time fave. On an embarrassing note, I like Three is a Crowd, the Three's Company spin-off.

Yes! What's Happening was such an awesome show! Can't believe I forgot about that. I also liked Good Times! Three's Company was great, but it sometimes stressed me out. I hated how like Jack would hear only part of a convo Chrissy was having then think she only had six weeks to live or something.

Did you ever get into 21 Jump Street? What about Degrassi?

OMG! "Degrassi"!! I also love "My So Called Life". I preferred "Head of the Class" to "21 Jump Street" though. I think it was too mature for me :) Same with "Miami Vice", yet I remember liking "Quincy" when I was super young. I was a weird kid!

I loved Degrassi and 21 Jump Street. Johnny Depp, yo. My So Called Life was good. I was at Antioch and in Seattle during its 1 Season run. I remember feeling too old for it but I enjoyed it anyways. Don't forget Roseanne and Little House! Speaking of Roseanne, I have it on right now.

I included Little House, but yes, Roseanne. Too funny!

"Gone But Not Forgotten" -- great title!

Family Ties is my favorite show of all time. Followed by Dallas, The Sopranos, and Veronica Mars and about 10 million other shows that are no longer on the air. Old shows are the best plain and simple.

A favorite of mine from the late 80s was Rags to Riches.

I have all four seasons of Punky Brewster on DVD, and I also have all but the last few seasons of the Nickelodeon cartoon Danger Mouse on DVD as well. Nickelodeon shows is a whole other realm I won't get into, but pretty much all of it rocked my world!