The Cranky Next -Door Neighbor

It's crazy to think that 1979 was over 30 years ago. 1979 was the year my parents moved us to Nassau County, Long Island. The "new house" was a standard size brown and white cape on a busy street. I loved that we had a pool and a basement for my brother and me to play in. I loved that we had a big tree in the backyard. The one thing I didn't love was the nasty family that lived next-door. 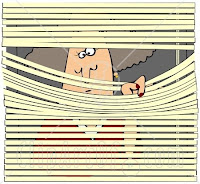 Before moving to that house, we lived in an adorable little ranch house in a Suffolk County town called Oakdale. We only lived in the ranch house for about a year or so, but I liked it there. Oakdale was a pretty town peppered with quiet streets, dandelions, duck ponds and trees with pink flowers.  I was only five at the time so that's about all I can remember.

Our new block in Nassau County was cold and hard. Cars beeped and traffic would build every rush-hour morning and night so we always had to be careful on our bikes. Sure that sucked, but the one thing that really made our days hellish, were our elderly neighbors. Each and every day they would take turns peering out of their front door watching us with their beady old eyes.

They would report back to our parents if we stepped on their lawn. They would run out yelling at us if our bike touched the patch of property which was close to our driveway. The funny part is that they didn't have fancy topiary gardening or landscaping. They had a boring, flowerless front yard with a few boring bushes.

These jerks were always aware of our every move. One night when I was about ten, I had a friend sleeping over and my folks were out for the night. My bedroom window faced their son's bedroom. Playing in my room, we noticed we could see him and his high school girlfriend making out. Shocked, we ran downstairs and reported our discovery to my babysitter. Her mouth fell open and she demanded we show her our vantage point. She encouraged us to tap on the window but I was nervous to do so. The babysitter insisted she knew him from school and said to just tap once so she could get a better look at his face. Like a bunch of idiots, we tapped.

Within seconds he was calling our house. She answered the phone despite my pleading for her not to. He complained to her about our naughty voyeuristic behavior. We stood next to her, nervously listening as she tried to comfort him, assuring him it would be taken care of.  When she hung up the phone, we made her swear she would not tell my folks. She promised she would keep it a secret. After all, it was her fault that we got busted.

Sure enough, as soon as my folks came home from their movie night, she reported us meddling in our neighbor's love affair. My parents were pissed. They sent my friend home and I was spanked that night with a hairbrush. I wanted to kill my babysitter and that asshole next door. Thinking back now,  if someone saw me making out with my high school boyfriend, I'd laugh or just shut the blinds. Who has the balls to call someone's parents over it?

As we got older the watchdog neighbors became tougher and tougher. I had friends who would beep their horns and pick me up. The old lady would question my mom as to who drove this car and who drove that car and if they could refrain from beeping their horns. When my folks went away, we'd throw somewhat tame pool parties. Cranky old bag made sure to fill my folks in on all the goings-on while they were away. 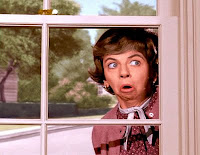 The old man has since passed, but was just as bad as his wife when it came to narcing on us. Always reporting to Dad how we walked on his side of the lawn or how our bike touched a patch of his grass, etc. She's still alive and kicking and every time I visit my mom, she's hanging out of her front door. Sometimes she calls me over to tell me something stupid though I pretend to be on my cell phone avoiding her as best I can.

When it snows, my brother shovels Mom's driveway and walkway. He was telling me that he can't help but shovel for her every time we get snow. He knows her sons live far and she's all alone and doesn't drive. He was saying today that even though he's nice enough to shovel her snow, she still bitches to him about how he should do this and that for her. We have decided that the next time she says something; he is going to rattle off all of the crap she did to us growing up. Someone needs to tell her how much she has sucked since day one.

Thanks for listening. I'm sorry to sound so mean, but after 31 years, it feels good venting.

Wow, they sound horrible. The babysitter too. Who would tell on something like that? Kids are naturally curious about other's lives. Doesn't mean they're going to grow up to be voyeuristic pervs.

Why can't grumpy neighbors be like they are in the movies? Misunderstood, calloused people that just need a little love in their lives. It would be so much nicer to deal with them.

Growing up we had similar neighbors. They didn't like my brother and I riding our bikes on "their" side of the sidewalk. They would get angry if we were laughing and playing loudly, like 5 and 9 year olds do!

We had a neighbor that was sort of like that too. He didn't want us to step on his lawn even if our ball went into his yard. He would sit on his screened in porch and hiss to scare us away. We were all intimidated and would dare each other to go retrieve the ball. Other than that he was very nice. He would sometimes come out and fix our bikes or toys. Just as long as we didn't step foot in his yard things were OK.

Elderly, but had a high-school age son? How old were they then, 55? lol!

But I can relate -- we had this pair of (truly) elderly sisters across the street. They were in their 70s. Always looking out their windows, hated when anyone walked/rode bikes on the sidewalk in front of their house. And forget it if you accidentally stepped on their grass (corner house; it was inevitable).

@RDS - I think they were very old parents. The old guy was retired when we moved in!