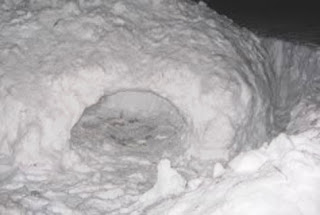 The big news of the moment is the possibility of  some significant snowfall that's headed for the New Jersey and Long Island area. Though it's not definite, we're still anticipating something.
It's kinda funny that no matter how old I get, this freakish excitement builds around a storm warning. This weird rush comes over me and it's all I can talk about with friends and family. Luckily my husband gets as equally excited. We check the windows together every so often to see if it's started. Then when it does, the curtains are left open so we can keep an eye on it. If the snow starts overnight, one of us is bound to wake up. If it's me, I can't help but whisper to him, "It's snowing! It started!"
I go through the same rituals as soon as our local news mentions the snow is coming. I make sure my phone is fully charged. Double check that we have bottled water, candles and matches on hand, just in case. Hey you never know. Today I made sure to pick up some basics ... bananas, bread and cold cuts. Growing up, my mom always served us tea and sandwiches when we were snowed in. When not dieting, I make sure we have chips and snack cakes on hand. Unfortunately for me, I'm trying to watch it, so this storm we'll be without that extra added deliciousness. I'm not happy about that either. I tend to crave a Ring Ding or handfuls of salty chips during a good snowstorm.
Tomorrow, I'll make sure my car is parked in a decent spot (one of the joys of being an apartment dweller) and stick my wipers up in the air like a fool. That was something I noticed when I moved to New Jersey. When snow is coming, people do this wacky thing with their wipers, pulling them up so that they point away from the car. It's really crazy and I'm not sure what the purpose is, but I do it too, that's if I remember to anyway.
I always loved a good storm. Thunder and lightening in summer and snow in winter. Don't get me wrong, I hate driving in it, even though this year we finally have a brand new four-wheel drive filled with gas and ready to escort us safely down the big hills in our town. There's something cozy about being home with hubby and our fur baby. We'll watch movies, stay tuned to The Weather Channel, play Nintendo games, eat, warm up with cocoa and tea. I'll try to convince my friend who lives next-door to come by for a bit. That's usually how it goes year after year in this apartment.
Hopefully by next winter, we'll be in a house, though I say that every year. That means we'll have to be sure to have ice-melting salt on-hand and two shovels. I don't even want to think about that. I've been spoiled living in apartment complexes. Since I left home, I've never had to worry about removing snow from driveways or walkways.
It's also funny how snow brings people together. Most people flock to pubs and diners no matter where they live. In my early twenties, I loved meeting my friends for coffee at the diner after being snowed in for hours at a time.
I'm sure my brother and I will text back and forth as we always do the minute the trusty weatherman announces a possible storm coming. Be it thunder or snow, we're both quickly thumb typing our phones about it. We keep each other posted throughout the storm, then talk about the aftermath. Were trees down? Did the lights go out? How did everyone manage with the snow removal and driving? Did anyone have off from work? With today's love of social networking sites, we're able to keep our Facebook and Twitter friends in-the-know. Everyone's status is a flutter with snow updates and photos.
Going through my old diaries, I found winter entries about snow. They were followed by dozens of exclamation points. It's crazy that I can still relate to the childlike passion in the penciled scribblings, "We're getting a big storm tonight!!!!!! I hope there's no school tomorrow!!!!!!" and "We got 10 inches of snow today!!! School is closed!!! WOOO HOOO!!!! We're playing Scrabble and drinking hot chocolate later!!!!"
Something I really loved to do back in the old days, was to build amazing snow forts. They were the coolest. They even had windows. I'd let my Smurfs live in the forts with me, then inevitably lose them within the pile of precipitation. Little blue bodies would surface days later as the sunshine warmed the snow. We'd go sledding near the Southern State Parkway. It was pretty flat where I grew up so that was about the biggest hill in town. 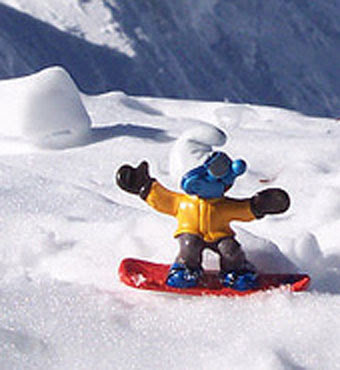 Silly how that anticipation and thrill of snow continues into adulthood. I'm sure people with kids can't help but embrace it. I'm a bit lazy in my old age. Maybe it's a good thing we don't have any kids. The thought of building a snowman doesn't have the same allure as it once did, but the hot coco, sandwiches and movies sure do!
at 6:03 PM

I feel the exact same way. The snow isn't supposed to start till tomorrow after noon but i'm looking out the windows now in anticipation.

i also loved snow forts and i always brought my smurfs in there with me... probably b/c they were blue and easy to see and waterproof.

That must be nice. I miss snow storms. It hardly ever snows in the south.

You brought back so many memories for me. I really miss snow. We had snow here a couple of weeks ago, but you'd laugh if you saw it. It was pathetic, but everyone was all excited.

I loved it when it would snow and I was nice and warm inside. There's something about looking out the window at the falling snow and the howling wind that makes me feel like I'm Laura Ingalls inside her warm Little House.