Where was the Internet when I was 12? 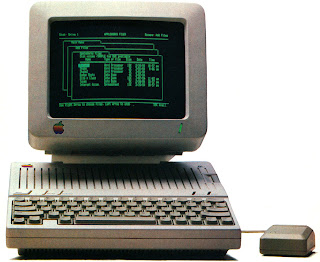 Do you remember your very first computer? Better yet, remember when computer class was called "Keyboarding"? I feel like such an old crank when I think about how great kids have it today. No need to spend all day sitting in the library, just Google whatever the assignment topic is. No more reviewing old black and white microfilm and carrying a ton of books home to write a report.

No more "White Out" encrusted assignments. Forget paper all together, for all I know kids might be simply emailing their assignments to teachers these days. I can just hear today's Central High School English teacher saying, "OK class, you have until Friday morning to complete your assignment. Please send me a PDF by 8AM." How lucky! I mean, why even bother going to class? Just work remotely like college kids do today with online classes.

I remember our very first home computer. It was the summer before entering 7th grade. My dad borrowed one from his school and let us use it for a few months before actually purchasing our own. It was an Apple IIc and came with a box of black floppy disks. A big hulking off-white computer with a dark screen and green letters. Dad provided me with several computer games which I quickly became addicted to.

I'm guessing they were through his school because one of them was educational and had to do with US capitals, president's names and other historical trivia. That of course wasn't my favorite game. No, my favorite game featured a variety of Olympic competitions. I loved the diving, the pole vault and skeet shooting. There was also a lemonade stand game which I could tell was probably developed for math class since it had to do with adding, subtracting and multiplying. I hated math, but loved playing that lemonade game. I marveled at the simple graphics and sound effects which consisted of basic thumps and beeps. I could play for hours trying to beat the computer.

Oh how I adored that computer. As time went by, I tired of the few games we had and began typing up articles about my favorite band at the time, The Monkees. I even decided to start my own magazine (fanzine) all about the group that was also my favorite TV show thanks to Nickelodeon. I'd write articles, short stories and review their albums. 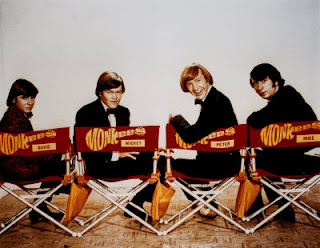 I'd print my articles out on the old dot matrix printer (I think that's what it was called back then). The paper wasn't like it is today, remember? It was a large stack with perforated lines at the end of each page. It was painful feeding it into the printer. I can recall the hideous sound of each page printing. 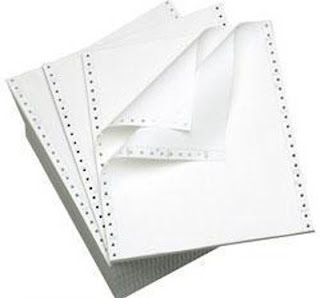 I'd spend an entire evening cutting and pasting pictures stolen from my teen mags and apply them to blank pieces of paper. Who knew about copyright laws at age 12? It was such a task getting the printouts and cutout photos to fit perfectly. Once complete, Dad would take me to the local printer and they'd Xerox them for me. I'd staple them together and mail the quarterly 'zine out to my readers. Yes, I even had subscribers. They paid $5 per year to read that little rag. I didn't earn a profit. In fact, I barely had enough to cover the printing and postage costs. I was a fan, I wasn't in it for the money!

I sold ads for 15 cents per word to offset the unforeseen postage costs and included a pen pal directory. I called the 'zine "Hit Factory" after a "best of" album. It was so much fun at the time. I sold subscriptions by placing ads in other fan mags and would sneak subscription forms into Monkees albums at Record World. Thanks to handing out hundreds of fliers at their Jones Beach concert, I somehow tapped out with 160 members all over the US. It was so exciting.

Dad suggested I send an article to Newsday to see if they'd publish it. They called me a few days later and ran my Monkees article in Kidsday. I was on staff with them for almost three years before we outgrew each other. It was thrilling seeing my name in the paper every few months. Yup, while other normal kids were busy at ceramics or dance class, I was calling in my articles. They had me read them slowly word-for-word to the editor over the phone. If we had the internet back then, I'd simply be able to email it to him.

If I were a kid today, I'd probably get nothing done. In addition to the fanzine, I loved collecting pen pals back then. I'd find them in Tiger Beat, Bop and through other fan magazines. I'd spend weekends writing letters back and forth to kids all over the world. I even wrote to celebrities. I still kept my old Trapper Keeper filled with letters and signed postcards from '80s stars like Corey Feldman, Kirk Cameron, Mackenzie Astin (brother Sean never wrote back!) and other sitcom stars you wouldn't remember from forgotten shows like Whiz Kids, Day By Day and Kids Incorporated.

If I were 12 today, I'd probably meet other kids through online pen pal groups or chat on message boards. No more waiting around for the mail. No need to blow my entire allowance on stamps and stationery. In a way, it's unfair, but then again it was a nice time. A simple time. No cyber bullying or worrying about online predators. I guess as with everything, there are positives and negatives. I wouldn't trade those memories for anything. :)

that is so freakin' awesome. i love that you did that! also, we're kind of pen pals when you think about it...

HA! I just made my college students e-mail me their term papers and take-home final exams! And I am on the couch reading them! Loves it.

I think I get what you're saying and I agree, kids today suck. lol

No, I wouldn't trade the more traditional approach I had for internet. I love libraries and part of that comes from school. Mind you I abuse Google these days something harsh.

That's pretty amazing that you made your own fanzine. And Monkees... well you read how I feel so that's double points in my book.

I think a friend or two of mine subscribed to you! I loooooved the monkees! My first adolescent crush was Davy Jones! I have his autobiography Day Dream Belevin' and it's autographed. i won it in 2001 in a radio contest.

We had a dot matrix printer with our first computer, too, and I hated the sound of that thing! It reminded me of some sort of top secret FBI Morse code or something. @_@