This year my Christmas list is seriously minimal. Sure, I'd love a laptop of my own or a diamond engagement ring that's bigger than the one I already have. But let's be realistic. You reach an age where your lists are just that, realistic - maybe it has to do with the whole being married your money is my money type thing. I think most people my age don't ask for much. Does anyone really expect a Lexus with a big red bow on it, sitting in their horseshoe driveway? That's a bunch of BS. Then again, I've never been wealthy nor will I ever be wealthy, so maybe it's just hard to visualize my hubby pulling the blinds open to reveal a brand new silver Lexus with a huge red bow on it.

About two weeks ago, my mom and I were discussing what hubs and I needed for Christmas and what we should get our family members, etc. We both agreed that when hubs or I need or want something, we typically just get it for ourselves. Sure there are luxuries, but I'm not really into expensive shoes and purses. I wanted a BlackBerry this year. Like most people, I waited for my free upgrade from Verizon. When it comes to footwear, I still wear Doc Martens. I won't lie, they run at least $100 on Zappos but I get about three years out of each pair. They're like indestructible.

This year, my list consists of Bath & Body Works hand soap (it's always on sale), anklets for the gym and a mani/pedi gift card. I'd love some Jadite or fake Jadite because I collect it, but I don't expect to actually get it. It's too much work, it has be purchased on eBay and who would bother with all of that? My husband is that guy who shops on Christmas Eve morning so it has to be quick and easy. 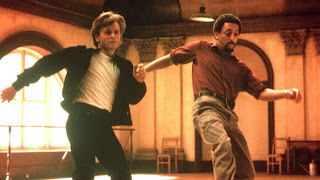 I looked back at a diary entry of mine from December 26, 1985. At thirteen, I received a "toasty warm electric blanket," Apple IIC computer and printer and "Summer Games" for the Apple IIC. Another gift which actually made me giggle reading about was... wait for it...  a White Nights soundtrack on tape! White Nights was this movie starring ballet sensation, Mikhail Baryshnikov and Gregory Hines. My childhood BFF Serena and I LOVED Mikhail Baryshnikov! He was so handsome and muscular. We also especially loved seeing him in his tights. Ha ha!

According to my entry that day, Serena got a Ouija board and of course we had to ask which boy in class wanted to be more than just friends with us. I was hoping it would spell out D-A-N-N-Y, but good ole Ouija was speechless. Maybe the spirits were off on Christmas Day?

Sadly, Serena ended our friendship soon after we graduated 8th grade which was devastating to me. Nearly every seventh and eight grade memory involves her in some way. We were inseparable, but her mother loathed me and at thirteen it's basically your parents way or the highway. She was a really good student and her mom was concerned that I was a distraction because I liked to call her on the phone, hang out, meet up with boys and see PG-13 movies.

Anyway, that pretty much sums up Christmas of 1985. It was an awesome year. A year when I had never heard of layoffs and furloughs. My parents were teachers - teachers always had jobs back then. 1985 was an innocent time. Long before September 11th. Long before my parents split up. Long before I lost both of my grandpas. Long before Grandma's memory decided to take an extended vacation. Yeah, 1985 was a really good year.

In case you care to view the White Nights trailer... Here it is.

There's always winning the lottery. Actually, my father-in-law won the NY Lottery back in the early 70's, but it was $50,000 back then. Still a nice sum.

I love all your wishlist! I never thought of a medicine ball but thats a great idea. Of course I'm always loving clothes and bags. I asked for a running belt/water thing. I'd love a treadmill but that requires a new house, lol!