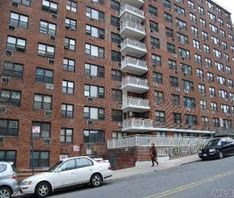 When I was a kid, I loved New Year's Eve much more than I do now. It was so awesome! Until about the age of 11, my family and grandparents would drive into Kew Gardens to visit my great aunt and uncle. Kew Gardens isn't very far, but back then it was like another time zone. We'd park on what seemed like a Manhattan city street and take an elevator up a few flights to Aunt Marcy & Uncle Henry's apartment.

Most of the people we knew lived in suburban houses. It was strange visiting someone in an apartment. New York City apartment buildings were much different than houses. They were kinda like hotels minus the soda, snack and ice machines. I would try to stand perfectly still for a few seconds and inhale the various aromas found in city apartment buildings. I would play this secret game with myself and identify the different scents.

City-style apartment buildings always have an undeniable aroma of bleach or cleanser often combined with ethnic foods, coffee and floral perfumes. It's not a particularly bad thing, but to me it's the epitome of city apartment living. I remember this same exact scent as it followed me to my minuscule Chelsea studio twenty years later. It also followed me whenever I would visit friends at their apartments in Brooklyn and around Manhattan.

Memories of New Year's Eve in Kew Gardens are far from thrilling, but to this kid, it was pure excitement. We never owned Connect Four, but my aunt did. My little brother and I would play Connect Four for hours and despite who won, my brother and I would repeat the famous, "Pretty sneaky sis!" line from the 1981 commercial every time. I could recite that commercial verbatim.

Aunt Marcy was the perfect hostess. She always made sure to serve up a delicious array of traditional snacks. Chilled sodas flowed freely throughout the evening. We'd feast on celery sticks with classic Lipton's Onion Soup Mix dip, pigs in blankets, chips and antipasto. Ah, Italians and their antipasto. Each salty bite tasted better than the next. My brother and I would lay on our stuffed little bellies, gripping couch pillows atop a neutrally-colored carpet. Anxiously we waited near the TV for the final 60 second countdown with Dick Clark.

My older relatives doled out pots and wooden sticks for us to bang and yell, "Happy New Year!" We'd laugh ourselves silly as Grandpa always took it a step further. Throwing the window open, he'd stick his arms and head into the frigid January air, and bang two pot tops together that sort of resembled oddly-shaped, mismatched cymbals. He had this two-finger-whistle which became his trademark noisemaker - he'd bust it out at our birthday celebrations as well. It sometimes scared the younger grandkids who weren't yet used to loud shrill noises. We'd often try to imitate that beloved whistle, but nobody could get it right.

I'm not sure why we stopped partying with Aunt Marcy and Uncle Henry in Kew Gardens. Maybe we simply outgrew it. I think we spent a few Christmas holidays in Florida, unintentionally breaking up the tradition. Sometimes my grandparents would host a similar get together at their house. One thing I do remember, was that Grandma would serve Bugles at her New Year's Eve parties. Be it a Frito or a Bugle, Grandpa loved his corn chips - I swear that man never met a corn chip he didn't like.

This year my mom's going to Connecticut to celebrate with my grandma, aunt, uncle and cousin. Deep down, I wish I was going. I would love to relive those family moments I remember from the early '80s. I would love to sit around with my family playing board games and eating salty snacks until our bellies hurt. Sadly my grandpa has since passed on, but we could bang pots and pans and keep his New Year's Eve spirit alive. I bet my uncle even knows how to whistle with his two fingers. He's from Alberta, Canada - that seems like something Canadian dudes would know how to do. Right? They're fun, lively people. Maybe next year.

How about you? What was your New Year's Eve like as a kid?

There are many wasted hours in my childhood, all spent trying to whistle with my fingers.

Ok that's not entirely true. *shamefully looking down* actually last summer I saw a video on youtube of someone trying to teach it... I spent a week trying to get it and couldn't.

I love New Year's. I always try to be outside when the actual minute ticks down. It's silly but I still feel like I should notice the difference.

My favorite New Year's Eves by far were the ones spent with with my dad's friend's family. The friend's birthday is Dec. 31, and he'd celebrate at a local restaurant that he rented out for the occasion. He's also one of seven siblings, almost all of whom had kids close to our age. So it was pure kid mayhem all night long. We'd stay up to 2 or 3 am, watching the NYE celebrations on the big screen TV. Wait, this would make a great blog post for tomorrow, lol. =)

What an absolutely fabulous and well-told story! I feel like I was there. You really captured the aromatic essence of apartment buildings! Thanks for this great tale from your youth.

NYE was definitely more fun when I was a kid than it is now. Now it's any other day...but when I was a kid it was filled with fun activities. Usually a bunch of friends would do a sleepover party and the night seemed to last forever. Once we crawled into our sleeping bags at 2am we were kept up by giggling and cracking jokes. Throughout the night we'd watch movies, eat junk food, hold wrestling matches, play video games, etc. It was fun.

We never really did much for New Year's but I remember mum cooked a special meal and we got to stay up.

Something in your post has made me perk up a bit and I have decided to trek to my friend's house for New Year after all.

Have a great one, Ally!