ET The Atari Game What A Let Down 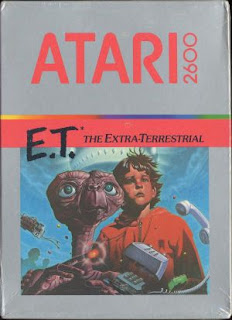 When I was a kid, I was obsessed with E.T.

I've seen the movie dozens of times. Even as an adult, I still own a few collectible items like E.T. trading cards, a pin, bedding, etc. We even have a framed movie poster hanging in our bedroom.

I remember one Christmas I was given exactly 12 ET-related items. I piled the unwrapped gifts around me near the Christmas tree and counted them over and over again--they included the plate, cup & bowl set, bedding, snack tray and more.

One gift I was beyond-jazzed about was an actual E.T. Atari 2600 video game.

Like most '80s kids, I loved Atari. Who didn't? My top favorite games were Space Invaders, Pac-Man, Asteroids, Pitfall and Donkey Kong. In 1982, the idea of an E.T. Atari game was simply too good to be true--the perfect marriage of my very favorite movie and my very favorite gaming console/pastime.

I remember popping it in and something just wasn't right with it. No matter what I did, I couldn't figure out how to play. Nothing about the game made sense to me. I remember thinking my version was broken somehow.  After a few failed attempts, I hurried to a friend's house because she too had just gotten the game. I needed to test out her version and remember my shock in learning she too was clueless.

Were we stupid gaming girls? How was it that we kicked ass at Pac-man, Space Invaders, Frogger and Pitfall, but sucked at the E.T. game? I remember being bummed beyond belief. I wondered why of all the games to baffle me, it had to be my E.T.? Such a let down.

Years later, I was working at an Internet company which owned a very popular male-friendly gaming site, IGN.com. I believe it was there that I first heard the truth about E.T. for Atari.

Apparently the developer was rushed into finishing the game design in time for the 1982 holiday season. Rushing the creativity process must have really made the game backfire. I'm doubting Atari had time to allow for lots of testing and market research-if any. They simply wanted to cash in on the E.T. craze.

At age 12, I didn't read media reports which apparently criticized the E.T. game. To this day the game makes "Worst Games Ever" lists all over the world. The Atari E.T game is also noted as Atari's biggest financial mistake ever made, netting a loss of $100 million loss.

In September 1983 reports began to surface about gazillions of E.T. game cartridges buried in a landfill in New Mexico, read about that here. Some say it's true, some say it's an urban legend. 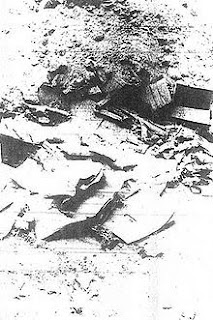 I love this quote from Howard Scott Warshaw, the designer behind the worst game ever created. It's cool how he puts a positive spin on his infamous creation, however it doesn't help me get over the disappointment in my most anticipated gift that Christmas.

"People worry I might be sensitive about the ET debacle, but the fact is I’m always happy to discuss it. After all, it was the fastest game ever done, it was a million seller, and of the thousands of 2600 games, how many others are still a topic? Another thing I like to think about is having done ET (consistently rated among the worst games of all time) and Yars' Revenge (consistently rated as one of the best) I figure I have the unique distinction of having the greatest range of any game designer in history." —Howard Scott Warshaw

Haha, it really was a beautiful disaster. Fantastic post.

Oh my gosh! I had totally forgotten about that game! I'm so glad you posted that video; I have vague recollections of playing it and it definitely was one that went to the wayside quickly in our house.

I love that guy's quote. That's one serious ego!

I still remember the Toys R Us "kids" commercial that featured a screen clip of the E.T. game. That's crazy to think how much of a financial loss it was even back then. So do you have the exact address of the landfill? Always wanted a copy.

Oh my, I remember hearing that story about the games being buried....

I guess they had to get rid of them somewhere.

I loved playing Atari. One was a game where you got to play hide and seek. I think it was called Hide and Seek. The other one I can't remember the name of it, but it was sort of like the snake game people play now on cell phones and stuff. Do you remember that one? No one remembers that one. We had the ET game too.

OMG! I remember having my parents buy me that game and I hated it. Worse game ever for sure! Probably the reason I always try it before I buy it now. It scarred me for life.

I love talking about old video games. I'm ashamed to say that I have never played Atari. I started out with NES. I believe in the landfill.

that game was the absoulte worst game ever!!!!!!!! I was so excited when I got it for Chanukah. I was happily trotting along and then BAM! Those damn holes!!!!!

I think Atari Pacman was the most disappointing. It's like they didn't even try.
I'm still not over it.

Wow. I am glad I never played it. It looks terrible!

I am sorry that you were so disappointed though!

I don't even remember there being an ET game. My brother and I liked the ActiVision games the most- Pitfall, Stampede, Dolphin, Barnstorming and Freeway. Donkey Kong, Frogger, Pacman and Ms. Pacman were other favourites. He liked Asteroids and Atlantis. He had the hand held Space Invaders game. I really was not good at any of the video games.