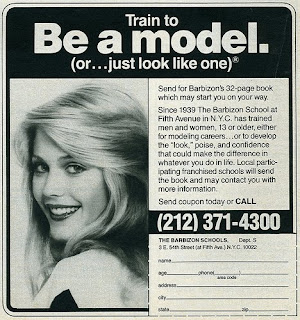 I've already mentioned my deep desire to be a child star growing up. Obviously, that  never happened.
A fierce follower of Seventeen, Teen, YM, Sassy, Bop, Tiger Beat, Teen Beat and 16, I would read the magazines cover-to-cover then scour the ads found way in the back of the mags. I loved sending away for catalogs and free samples, but one ad always bothered me. It was a smallish square black and white ad for The Barbizon Modeling School. The modeling school had to be legit since it had been around since 1939.

I remember calling the Manhattan phone number a few times though I never had the nerve to tell them I was on the chubbier side. I would ask them to send me brochures and they would tell me all about their classes. I think they were very careful about revealing the high price tag attached.
I never did sign up. My mom wasn't cool with the idea. Not to mention at 13, New York City seemed miles away although ten years later I commuted there daily for work and never thought a thing of it.
Ironically the ad often ran on the same page as overpriced fat camp ads for places like Camp Shane and Camp La Jolla. My parents couldn't afford the 8-week program so she sent me to Girl Scout camp instead. Mom also insisted with my luck she'd pay the college-like-priced tuition payment, I'd lose 20 lbs, then gain it as soon as I started school again. No disrespect to Mom, I'm sure that's exactly what would have happened.
That same black and white image of a pretty blond teen (she appeared much more mature and glamorous than me and my friends) along with the Barbizon tagline of "Train to be a model, or just look like one" is forever etched into my mind as is the fat camp ad, really! They're both Scotch-taped on an imaginary scrapbook page alongside the Lisa Frank stickers and Corey crushes I told you about last week.
at 1:00 AM

OMG! Teen Beat and Tiger Beat! You rock, sister...I didn't know anyone remembered them (or admitted to it.)

Wow, Barbazon, that brings back memories. I actually knew someone who went to Barbazon, she was a little chubby five foot tall teen and she took their modeling classes and got a portfolio.
It was an expensive scam of course that got people to pay a ton of money for fake modeling classes and an expensive portfolio of photos.
But it was kind of like fat camp for this girl I knew, since she took the whole thing so seriously, she lost a lot of weight so she could be a model. She never became a model but did keep the weight off.

I remember all of it, thanks to your post. Tiger Beat was the best. I never had the confidence to even dream about training to be a model or or just looking like one. Good for you that you did. (Barbazon was probably the last legitimate modeling school in the country.)Thanks for another dejavu moment, Ally.
Cheers,
Robyn

PS Oops, I see, thanks to Aine, that Barbazon was not legit. Aha, you didn't miss out, Ally!
Robyn

Wow Barbazon. Here in California we had commercials on TV where they would just repeat the name over a synthesized background music. God it was annoying as hell and just reading your post brought it back. LOL. Thanks Ally! ;)

Never heard of that. Told you I didn't get out much. Still don't ;)

I modeled and performed for years as a child and years until finally I was told I was too short for modeling and my voice was too weak for performing.

It would have been better to never have wasted the time.

And the embarrassment of being dropped by your modeling company at the ripe age of 14.

Oh the memories you bring back. :)

My dream was to sell Grit Magazine to win a transistor radio. Hey, that Barbazon thing reminded me about that NY Ritz Thrift Shop that used to advertise 'round the same time period. "You don't need a million to look like one." "Ooooh, thank you."

Wow! A blast from the past!

Oh man, when I was growing up, I was going to be a fashion designer! I went through all of my magazines, and ripped out pages of pretty clothes, and then put them in a 3-ring binder.

Sexy picture of Mr. Johnny Depp on the front of that mag :)

I used to pose for a life drawing class, and believe me, it's not that exciting. Nothing over the top, basically just sitting on a stool reading a book, or lying having a picnic. My profile painting that I use is me, and I was actually asleep during that one!
It was so boring! I wish that I had gone in for modelling clothes now!

I totally forgot that and I remember that ad.

Hey will you re-post the one about the safety-pins beads and the Hair ribbons?

It showed up on my Google Reader and then said page not found.

In case the post is lost or something - I did both and I totally WISH that the hair ribbon thing comes back in style I would LOVE to do that with my girls!

Hey, wait! Maybe I will just do it anyway - neither girl cares about what is "in style"

@Aine, maybe I should have applied
for the weight loss part!

@Erin that totally sucks. I'd be devastated :(

@Copyboy I totally remember that!

@Girl my bad! I was editing Thursday's post and somehow it went live... Guess everyone got a sneak peek!

I used to love these ads. I used to read them from behind my very thick glasses.

I had a friend that actually went there, but I don't believe she ever got a modeling job. It wasn't a total loss...I guess she learned to walk nicely and use good posture.

omg. you shocked me back 25 years with that ad. do you know how long i stared at that girl's face? every month for at least six years.

You were a lovely girl and not fat. I don't want to criticise your mother, but what is with all the weight talk? Sorry.

@Tina, I hope I'm not misrepresenting my mom. She was a realist and I honestly think she was trying to protect me from rejection. My folks always encouraged me to write and draw in other words, focus on the talents I had :)

Sorry Ally, I just feel for you. I'm glad that I'm wrong.

I'll never forget that Ad. It always wound up being in all my mother's crossword puzzle paperback books. Lol.

Haha I used to stare at the Barbizon ads too!

I dated someone awhile back that said he used to work for Barbizon and he went on and on about what a complete scam he used to run on people because that's what he was trained to do.

Are they even still around?

My mom made me go to Barbizon! UGH...the nightmare.

I was hanging out with a bunch of mom-friends (similar age) and quoted that ad and only one other mom got the joke (who - like me - grew up in NJ). We were trying to figure out if it was a NY-NJ thing.

I remember the episode where Eric (the dreamy big brother played by Will Friedle) was at the mall, and model Kathy Ireland tells him he's handsome and could become a model....

He ends up spending $90 on headshots (which was a lot of money for Eric), and finds out that others (including nerdy Minkus (you just giggled if you had watched the show)) had been offered a modeling career by Ms. Ireland....

When Eric goes to get his money back at the mall Ms. Ireland offers him a modeling job at the mall.... But it ends up being a job wearing a lobster costume at the food court....

Long story short.... I always thought that Barbizon was a scam.... Making people pay lots of money for false promises of fame and fortune....

Ugh! I remember that ad! That is so crazy! I remember wanting to do the classes as well as a kid. Sigh. The brainwashing we go through sometimes.

It would be cool to find someone who actually did them and hear about their experiences there. Then, I would want to scrutinize a picture of them, just for shits and giggles.

Haha! I wouldn't really, how mean would that be?

You are killing me...I am so glad I discovered your blog earlier. I remember this ad and felt like I was reading about my own desire to go...you know what...my friend did get to go. I was so jealous...(she was on the chubbier side). I am following you too!
Holly
504 Main

Our mothers thought they could manage us right up to 21!

i know someone who went to barbizon and it was more of a "make your daughter feminine" school rather than an actual modeling school. what they taught was downright embarrassing!

Hi! I found you through Girl Next Door Grows Up's Feel Good Friday. I'm loving all your 80's flashback posts! I'm following and will be back.

I actually went to Barbizon but don't have good memories of it. I quit with only 1 or 2 classes left. 2 girls there called me Bride of Frankenstein.