The Olympics Bore Me

Today a friend posted on Facebook that she can't stand the Olympics. As expected, everyone gave her a hard time and disagreed. They all proclaimed their undying affection and love for the games. I'm totally confident that my readers will say they too love watching the skating or skiing or something like that.

The Olympics is just another one of those things that makes me an alien to society. I don't like anything the average American likes. Like the show LOST. Everyone loves it. Me? Boring! Gilligan's Island was way better! Everyone loves Lady Gaga - hello, she is sooooo lame. America loves Uggs, not me. I don't care about movies like The Hangover or Superbad. 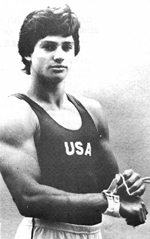 Yeah, so I gotta tell ya, since like the late '80s, I've had zero interest in watching America attempt to beat these other countries. Zilch, zero, non, nada. Who cares? The yelling from the announcers. The dumb judges. The repetitive commercials like the one with that Trainspotting song - dude, so like15 years ago... The intense media blitz. It's all a total snooze-fest to me... It may be that because I'm just not interested in sports at all, these big sporting events are painful to me. I don't give a crap about The Superbowl (just an excuse for me to eat wings) or The World Series. NASCAR is totally retarded. Yes, I am among a rare minority. I get that this is part of the All-American lifestyle -- spectator sports.

Every four years, I dread the Olympics. It seems like it's on 24-7 for a gazillion weeks. My husband keeps the channel locked and fixates on the skiers, snowboarders and those dudes that lay on their backs and go down that insane alpine slide thingie. I know what it's called but refuse to say it. The word reminds me of the word "loogie". Loogie has to be the grossest word ever. My little brother loved saying it when he was a kid. "Ally, I just hacked up a looooogie!" 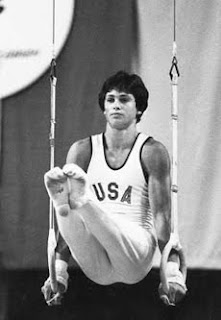 There was one time in my life when I actually loved these games. Just one time. It was the summer Olympics, 1984 and Mitch Gaylord was this amazingly hot gymnast. Sure, I was only 12, but wowzas was he yummy! I loved watching him jump on those bars and do those flips. He was so awesome at it. I couldn't believe the way he always landed perfectly. His body straight with his arms out-stretched. I hated how in grammar gym class they'd make us run and jump on that horse bench thing. I could never do it. I was too chubby to lift my 80-pound-body up with just my wrists.

Anyway, I thought about him the other day. My uncle made us all watch the opening ceremonies. Something I haven't sat through in about 20 years. I joked with my cousin that I was a big Mitch Gaylord fan. I told him that I knew with a name like Gaylord, he couldn't actually be gay. We looked him up on Wikipedia to see what he's been up to and if there was any mention of him having a partner. Turns out, he's on his second marriage and has kids. Not that it would matter if he was gay - I just think it would have been kinda too obvious... a gymnastics guy having last name of Gaylord being gay. Too cliche, ya know?

Maybe I should write Mitch a letter or email letting him know he was the only aspect about the Olympics that I have ever cared about. Wonder if that would be insulting or flattering? Hmmf.
at 9:05 PM

Maybe you should plan a picnic with all his biggest fans and then not show up.

That's so mean, Kris. That Monkees picnic was not my fault! My mom wouldn't let me go. I was 13. I had no choice!

this is so effing hilarious. i just spent the last five minutes guffawwing loudly. thank you.

Ok I have never seen Lost and no I do not like Lady Gaga, she wants to be Madonna or something.

I like the Olympics. I watch certain events like figure skating, gymnastics, snowboarding, luge, and a few more. I do not think not enjoying it odd. I know many people that do not get into it at all. No biggie. Jumping all over somebody for their personal tastes is lame, imo. So go on and watch whatever makes ya happy girl!

I hate the Olympics too. Its all boring. All I think of is there goes any show I watch n NBC for that time. I did watch Lost at first but it got too complicated for me. Its a great concept if it was the only thing I watched but I have too much to keep track of with that show.

You didn't watch the 100 hour long opening ceremonies? It was soooooo long! The only redeeming factors were the whales with the blowholes coming out of the floor and Wayne Gretzky's frustration when the torch posts didn't rise out the floor (only three out of four came out of the floor). All I know, is that I'm not able to watch my regularly scheduled programming.

Lady Gaga tries way too hard. She puts on a bedazzled lightning bolt at the Grammy's, and it's a huge look at me.... It's very unflattering....

By the way, the Opening Ceremonies were the most watched television program in the history of Canada! 84% of televisions in Canda were tuned into the ceremonies....

I'm with you on Mitch Gaylord. I even had that terrible movie, American Anthem, on VHS. Also with you on Lost and Lady Gaga.

I'm a big Olympics fan. More summer than winter. It was exciting for me this year because my oldest sister competed in the Olympic Trials, though did not make the team. (She's a skeleton slider. The only fuckers crazier than the lugers!)

I used to love the winter Olympics the figure skaters were my favorite but skiing was pretty exciting too. I also love watching gymnastics but that's it for me. But in recent years with all of the drug allegations and judging politics and goofy, craziness with the figure skaters (Tonya Harding and Nancy Kerrigan) I just lost interest.

Oh I'm with you on this one - there's been no point watching the Winter Olympics since Torvill and Dean!

Anyway, it's great to have to back and blogging away again - I missed you!

There's a little something for you over at my blog.

Loved his movie with Janet Jones!!!! American Anthem!! I wish they had it on DVD!! So you're saying you hate Eddie the Eagle as well?

I have never watched Lost either. And I don't care that much about the Olympics. So I hear you on this one!

I think you should write him a letter!

I agree, Olympics - like all sports on television - are booooooring. This may have something to do with my dad watching endless rounds of golf (aka, MOST boring sport on tv) for WAY too many hours. I have watched LOST but got bored with it. I may tune in to the last episode just to know the frick was the point of the entire thing. Found your blog from Tuppeny :)

I'm catching up a little bit tonight, but I've been in Vancouver via TV. Not much blogging time lately. I liked the Olympics much better when our teams were truly amateur. The USA-Russian hockey game was something I'll always remember, but I still enjoy watching today...just not quite as much.