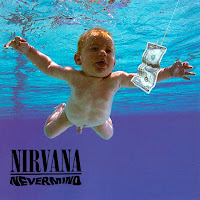 The other day my husband and I were taking a drive and Nirvana came on Pandora. [Side note: I recently discovered that the iPod cable also connects my BlackBerry to the auxiliary feature of my car stereo. In other words, I can tap into internet music via my phone while we drive. Yes, I'm sure you already knew this, but I'm less technical than most.]
Whenever I hear a Nirvana song off of their album Nevermind, I can't help but feel as if something has grabbed hold of my mind and spirit almost throwing me into the exact same scenario every time. The scene is as follows:

I'm sitting in my old maroon 1979 Mercedes Benz 300D. There are three kids in the back and trusty Scotty Tay, my permanent Wingman, in the passenger seat next to me. Nirvana is blasting on my crap-ass tape deck and everyone's smoking and probably drinking Bud cans (not me, don't worry, we've gone over this, I was never into drinking and driving). The backdrop is always  the same with this Nirvana crowd -- a random dark, vacant parking lot in Hewlett or Cedarhurst, somewhere within the Five Towns of Long Island.


For those unfamiliar with Long Island, The Five Towns consist of five small towns neighboring each other along the boarder of Queens and LI's South Shore. Most people from the area will tell you that those living in the one of these 'hoods are typically affluent and most likely of Jewish decent. You can find some of the best Jewish delis, Kosher pizza places and bagel delis within The Five Towns. Back in the late 1980s, Cedarhurst had great shopping for preppy kids with fat wallets or parents who made bank ... you name it from Benetton to Banana Republic, it was like this mini shopping mecca for the snobby kids.

Back in 1991, I met up with some cool kids one night at our Mineola hangout, The Angle. This was mentioned in a previous blog, a teen club that played awesome music back in the day. Most of LI's clubs stuck with horrible disco and had names like JAMZ and catered to the guido crowd.
I recall several cute guys, Mason and Ed needed "a light" and from there a friendship blossomed. Hard to remember a time when you could smoke inside - not that I miss it, just saying. We hit it off instantly as friends. It turned out Ed was from the Gibson area, not too far from where I lived. I didn't really know many cool kids from the South Shore Western Nassau area and was super excited to finally hook up with some cool local blood. "Cool" meaning into the same music and style. It was like an entire subculture that' difficult to explain.
It also turned out that Ed and I attended the same college so I quickly introduced him to everyone I knew and vice-versa. This was basically what I was explaining to my husband. How back in my youth, it was almost as if we all "dated people." When I say "dated people" I mean groups of different people, girls, guys everyone. I say "dating" because you went through them quickly.

For example, one month I'd be hanging with a group of kids from Huntington. Next month, we met up with a group of kids from Northport. Next month, we're tight with Commack kids. Next month, we're all about Hicksville kids. For several months Babylon becomes our second home. Another year we're all about Rockville Centre kids. Then it was the Garden City peeps and who could forget the Levittown and Wantagh dudes? Hold up, just met a crew of people from Long Beach and Oceanside. Anyone remember Jen and Tarah's buds from Franklin Square?

Like, I think within a span of five years I managed to meet up with over 2,000 different ravers, industrial music fans, mods, grunge people, new wavers and ska types, yet their names and faces are a blur to me today. I asked my hubs if he had this same experience growing up and he agreed. He said it was just a big part of our youth and going out and being around. It seems so weird to me now -- all of these faceless, some nameless kids have crossed paths with me. I've gone to their parent's homes. They've partied in our pool. I've driven around in their backseats. Some I've made out with. Some maybe more.

Tom M., Andy, Adam from Kings Park, Jason, Eileen, Doug, Bonnie & Pete, the Jersey guys from Hofstra, Rina & Corey, Bill, Randy, Joey, John, those guys from Stony Brook, the Arties, Brad - the rich kid from Westbury (he was in a band called Wheelchair) who dated Laura from Franklin Square - I hung out in his family's basement. There was a recording studio and disco ball down there! Laura? Annmarie who dated Kevin  -- she decided she hated me after a month.

Where did everyone go? I don't really care. The point is, youth is such a funny thing. Did this happen to you? Did you meet up with dozens of friends that came and went throughout the years. It seems so odd to me now.

Yes, and I sometimes wonder what happened to them. I remember being at the Jersey Shore and a guy we met was going to Vietman. Did he make it back? He broke up with his girlfriend because he didn't want her to wait. She was crying and he was crying. We didn't even know these people...they were just staying at the same motel. We were friends for a weekend.

Sounds oh so familiar! We used to all cram into my bust ass baby blue Ford Escort and hang at a park we called Dragon Park (it has a huge mossaic dragon sculpture you can sit on and climb). We wouls party with masses of people. Some I still talk to and others... idk...
teen years are like that I guess. Good times.
Awesome post!!!!

That was probably one of the best album covers ever.

We were in the Ford Temp cruising down Huntington. Trying unsuccessfully to get into the Dodger with our fake IDs. I thought Dix Hills put everyone to shame in the rich kids category?

I understand the whole sub-culture thing because I too, was a part of it, and it was the most amazing thing ever. Nirvana is still my favorite band today.

I think I was different though, or my friends were different. There were a lot of us but we all stuck with each other. Like a family. A HUGE family. We dated each other, fought, laughed, and were generally pretty intense about one another.

Whenever an 'outsider' came in to the group, we were all wary until they were accepted. Weird, isn't it?