The Ghosts At Regina's House

Picking up where I left off the other day... 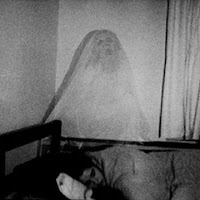 Finally the police activity came to an end and we were cleared to enter Regina's beautiful mansion. Kevin left and several of us girls stayed behind to crash or sober up at Regina's.
Upon entering her lavish home, I tried my best to take it all in without looking like the poor slob that I was/am, though it felt darn near impossible.You know that feeling when you're younger and you enter the home of a much wealthier friend? My eyes hit upon certain furnishings, artwork and lighting appearing much fancier and elegant than the items in my folk's house.
The one room that truly struck me was this colossal ballroom. I peeked through the antique-looking French Doors that led to the room. It was dark, quiet, tranquil and strangely eerie. The room was spacious, yet felt rather vacant. The only items I recall seeing were two small childlike rocking chairs holding collectible dolls on the floor in the corner.
Regina helped fix us some beverages and we settled in for the night. We followed her up the never-ending staircase to her bedroom, which surprisingly didn't look all that fancy. In fact it was so ordinary that I can't recall a single thing that stood out other than the alarm clock. More about that later. 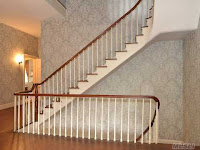 We removed our shoes and pulled our hair into Scrunchies (hair bands), preparing to recap the evening's events before passing out. Someone must have gotten onto the topic of how awesome Regina's house was because she soon gave us a mini-tour. Within minutes she went into a series of freakish ghostly occurrences she had experienced living there. My heart began to race and my senses went into full-swing as she started with a small bedroom down the hall.


She told us stories of hearing child-like voices and babies crying. She talked about a time when she was small and lost her footing while going down the same staircase we took to reach her bedroom. Regina's eyes grew wider. Her voice and hands trembled ever so slightly as she recounted the event. She described a force, a mysterious force so strong it halted her fall allowing her to regain her footing before landing at the bottom of that stairwell. We gasped in disbelief. She firmly believed that if not for this ghostly force, she would have been badly injured or maybe even dead. 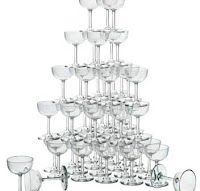 As soon as she finished with that story, she went on to tell us other spooky tales even more shocking than the next. The ballroom I admired is where they often celebrated New Year's Eve with the family. One year, after an evening of partying, they were too tired to clean up before heading off to bed. They left a mess of glasses and items out and didn't think anything of it. Regina told us that the next morning they awoke to fix breakfast and were shocked to find a perfect pyramid of champagne glasses. The sight frightened her family. Everyone was stunned and denied having anything to do with it. The mood over their New Year's breakfast was chilling as everyone thought about the odd entity that messed with their mess. I know you probably don't believe it, but I do.  I gotta tell ya, I felt some serious weirdness while I was in that house.


We finally curled up in blankets on the floor of her room and dozed off. At about 4 or 5 am, we awoke to a loud bang. Her alarm clock flew across the room waking us out of a sound sleep.  OK, time to go. Screams from us girls followed of course and I hurried into my Airwalks and hauled-ass the hell outa there. I don't think I've ever moved so fast in my life. I was just like, "Later guys! I've had enough."

I'd had enough of the night from hell that began with Farmingdale cops crashing our party in the woods and ended with a ghost throwing an alarm clock off a nightstand. I never did return to her house other than to drop her off from school once.

*Photos are for illustration purposes only and are not of above mentioned house or ghost.

Oh my. That would have scared the crap out of me. It's ok to hear the stories and be a bit frightened by it all, but to actually have experienced it firsthand with that alarm clock.

I wouldn't have gone back either! What a surreal/ creepy night that must have been!

HAhahaha! I remember having a sleep over at someone's house in my early teen years. We watched the rocky horror picture show. Then late into the night scared ourselves to death with Ouiji. I swear no one moved it! lol

I love a good ghost story - thanks!

WOOOooooOOOOooooo! WWWooooooOWOOOooooooowWOOOOOOoooo!
Ghost sounds by the way. I LOVE a ghost story any day. I've always had a deep interest in the paranormal.

Puts my 1 room hovel in NYC to total shame.

Hi Ally,
I love Judy Blume and am glad to be a new follower.
Cheers,
Robyn

Man I really missed you and am enjoying the story!

Normally, a story like that wouldn't phase me.... But I just watched 'Paranormal Activity' and while I was reading that story, the air conditioning in the building came on with a huge clunk.... Scared the hell out of me....