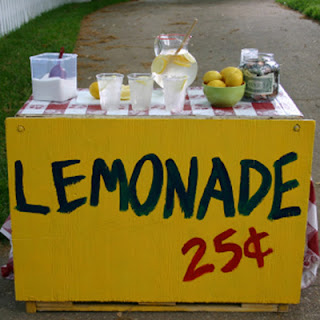 About a month ago there was a story on our local news station about some how a group of children were banned from hosting a lemonade stand on their parent's property. In fact, the kids claim they were raising money for an ill child. Apparently HOA rules strictly forbid vending of any kind from their townhouses. Wonder if this goes for Lia Sophia parties and girl scout cookies as well? Hmm.
Now, I agree with this rule to an extent, but wow. For example, I've always hated those professional garage sales -- you know you've witnessed this too ... that front lawn and driveway cluttered with crap for sale every single day for weeks on end. Really, I've seen this in New Jersey, New York and around the corner from my dad's house here in Florida. In this case, however, we're talking about little kids doing something we've all done. Sell lemonade!
Lemonade stands are like a rite of passage for every child in America -- at least that's how it was growing up in the '70s and '80s. Back then, it was my main means of earning a living during those hot Long Island summers. The Lemonade stand was always much more fun that delivering papers (ugh, sweaty with actual physical labor involved) or babysitting (ugh, dealing with parents' rules like, the kids are only allowed to watch The Cosby Show, deeming Growing Pains as "inappropriate" - so Kirk Cameron's character Mike had a friend named Boner, whatever!)
I loved hosting lemonade stands! Sure sweating balls whilst standing behind a cheap-ass folding table balancing what felt like a 100 lb Tupperware pitcher filled with citrusy goodness and a stack of waxy floral Dixie cups (remember those?!) praying a passer-by grew tiresome. But I was my own boss! 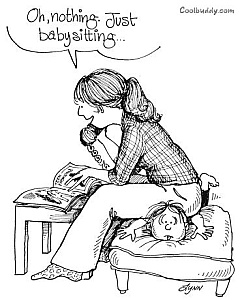 I could open and close whenever I felt like it. Nobody could question me on how in G*d's name one toddler could possibly knock off an entire plate of brownies in three hours. Um, hello! Seriously, people. Entertaining your rug rats for endless hours at a time builds up an appetite. Just kidding. Sort of.
Anyway, as cranky as I am about people not following the rules of a town house or condo, I believe some rules are meant to be broken. Let a kid have a lemonade stand once in a while. Although maybe ask them to refrain from shouting, "LEMONADE HERE! GET YOUR ICE COLD LEMONADE HERE!" I can see how that would grate on my nerves after about an hour, especially if working on a freelance assignment.
Click here for last month's news story about the children selling lemonade in Palm City, Florida and to view the video.

I loathe HOA rules. And yes some of them are meant to be broken.

Hi Ally!
There are "red" rules and there are "blue" rules. "Red" rules are important ones that should be honored. However, it is our duty to break the "blue" rules everytime we have a chance to. They are nonsense!

Banning a lemonade stand is definitely over the top, but unfortunately, without the rules, then everyone (and I mean adults here) and their monkey would be selling their junk in their driveways. I loved doing lemonade stands when I was a kid. I loved the work, the sense of satisfaction and the pocket change at the end of my 'shift'. - G

Sounds bogus to me. Kids should be allowed to sell lemonade. Let them learn all about running a business. They can always have their hearts broken as their business folds due to regulations when they're an adult.

From now on, I vow to NEVER move into a neighborhood that bans lemonaide stands. That is the biggest bunch of BS I've ever run across. Someone should sue that HOA.

The Kid In The Front Row said...

There are always stories like this. I'm sure the future of lemonade selling is fine!

HOA should be renamed "Homes of Assholes," IMHO.

What's next? A shake down of the girl scouts?

HOAs suck....and I ought to know, because we live in a development where we are governed by one. NEVER again.

Can't imagine trying to discourage children from working and earning a living... so young. Hope it doesn't set them up to be future deadbeats.

this is just stupid.

Once again - just makes me appreciate my childhood all the more! Back in the '70s, it wasn't a problem to have lemonade stands, and there was no one greedy enough that there had to be rules to restrict them from trying to sell their junk as mentioned above.

Oh, for the simplicity of life back then...

that is sad that they would not let them have one... i dont remember having one, but i loved seeing kids with theirs set up