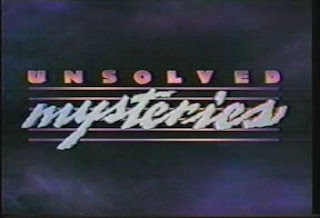 In the late 1980s, I was obsessed and mystified by the documentary style TV show, Unsolved Mysteries. Unsolved Mysteries (started on NBC, moved to CBS and Lifetime) was hosted by Robert Stack. Mr. Stack was most famous for his role on the 1960s show The Untouchables. Unsolved Mysteries focused on a variety of cold cases, missing persons and even alien abductions and paranormal activity. The show relied heavily on viewers to contact authorities if they had any information about the crimes.


The daunting theme song accompanied by Robert Stack's serious expression and tone set the perfect creepy backdrop for suspense. My mother and I never missed an episode. We would anxiously await each week and cross our fingers for UPDATES at the end of each show. If the missing person was found alive or a murderer was imprisoned, we'd rejoice with a sigh of relief.


Unsolved Mysteries ran from 1987-2002 (Robert Stack died in 2003) and was picked up in 2008 by Spike TV and hosted by popular cop and mobster actor, Dennis Farina. I managed to catch two episodes yesterday afternoon and although they were eerie and disturbing, it simply wasn't the same without Robert Stack.


Today my husband and I never miss an episode of TruTV's Forensic Files, we're big fans of narrator Peter Thomas and giggled when we heard him in the Burger King commercials. A very odd match, obviously the point of his voice featured in the ads.


Check out the opening credits of an episode of Unsolved Mysteries below.

That theme music still gives me the willies!

I agree 100%. The newer version of Unsolved Mysteries is just not the same. I was SO into that show when it was little, and even more as I got older and the re-runs would show.

I often wondered what Robert Stack was like off the Unsolved Mysteries set. Did he make jokes? Did he smile? Laugh? Speak with a particular inflection that might indicate he was capable of having non-serious moments? :p

I agree. The old version had a creepiness to it, that's for sure.

OMG, same here. My dad and I were heavily addicted to this, Cops, America's Most Wanted, Dateline and Biography.

I used to love the old version. I even watched the reruns. Though the music really was creepy to watch late at night with the lights out.

I totally remember watching this!

That was a great show! I always tried to watch it. That music was kinda creepy...

Actually for a bit the wife and I watched Autopsy on HBO. But unfortunately it was all about Canadian serial killers. BTW...Loved RS in Airplane.

I love Unsolved Mysteries! Although the opening music and Robert Stack's voice freaked me out, I couldn't not miss an episode. Such a great show.

It's nice to see that they are updating the stories on the new ones, but it is not the same without that theme music and Robert Stack.

Oh yes -I enjoyed that show too -except I could hardly watch it without getting scared! ;)

Noooooo!!!
That music and him combined scared the ever lovin' shit outta me!!!
My mom would be like, "Hey, Mace, I need you to run out to the car real quick and get whatever it was she needed."
We lived in the boonies.
I just saw Robert Stack talk about a girl my age who disappeared in the boonies.
COME ON!!!
No way am I going out there!!!

OMG. I just listened to the music again and now I've got goose bumps.

I always wanted to help solve the mystery! Sadly, none of the criminals or missing children ever looked familiar.

When I still had cable, I was ever-so-slightly obsessed with Forensic Files. The Frank Bender/John Emil List episode gets me every time. Cold Case Files on A&E is also pretty stellar.

I LOVED Unsolved Mysteries, I would watch it with my mom too!

My brother recorded every ghost or alien segment on Unsolved Mysteries. Then when our parents went out, we would pull our sleeping bags into the living room and watch it and scare ourselves stupid. We'd finally fall asleep huddled close to each other. We were 12 & 13, probably too old to be doing that.

I was a weird kid, so Unsolved Mysteries was my absolute favorite show! The new one isn't the same without Robert Stack and the way he used to say the title of the show, remember? With that weird stress on the "Un"? He would say it just a little bit longer than necessary: "Unnnsolved Mysteries."

I was just saying this to my husband the other day. I was excited to see Unsolved Mysteries in the program list but it just wasn't the same.

It was great to hear the theme tune again - it really set the tone.

I'm scared!!!! There are several shows today that have the same format. There is the one hosted by a young asian man. (HE's HORRIBLE) that talks about ghosts. I can't recall the name of the show. I think it's like the "Unexplained" or something. This one was creepy.

Oooooooo. I loved this show and his voice. It sucked me in every single time!

Unsolved Mysteries! That takes me back.

This was one of my favorite shows! My favorite segment was "The Unexplained" when they covered UFOs or aliens. lol.

I also remember the very first episode with Raymond Burr as host. That was before it became a regular series; it was first just a one-time TV special.

OMG, how I just LOVED that show!! Thank you for helping me remember it. =) I'm going now to hunt up the theme song as a cell phone ringtone!! LOL

SCARIEST.FUCKING.SHOW.EVER. just hearing the into music used to send me flying out of the room until an adult was ready to join me.

the updates was double scary for me. almost as scary as when the tc channel would do a test by the Emergency Broadcast System.

Unsolved Mysteries was X Files for the conspiracy theorist, if I recall. I only watched occasionally, but I remember being captivated.

I sorta screamed a little when I saw you posted on this. That show was like my meth when I was younger. You know, I couldn't stop watching it but it frequently creeped me out so much I couldn't sleep for days.

Although it is NO WHERE near as good with out Stack I was still uber stoked they revived it on Spike.

I LOVED watching that show! Yes the music gave me chill bumps but I had to watch it. Thanks for bringing back good memories. My sister hated it so I might have watched it out of spite. lol.

Amelia Earhart's story always had a profound impact on me.
xoRobyn

I used to LOVE this show! However, it did freak me out, too...

I loved! Unsolved Mysteries. It used to scare the hell out of me, though.

My favorite stories were the ones about people looking for kids they gave up for adoption or the twins separated at birth.

Unsolved Mysteries would creep me out when I was little. I remember one night my parents were prepping for a garage sale outside and I was alone inside watching the TV. Even though they were 10 feet away and I could hear them talking outside, I was scared beyond belief.

I remember watching this show and I'll never forget the theme. SO scary! I just posted about this not too long ago. I always loved the ones where they had an Update at the end. Those were few and far between though.

Wow, think a repressed memory just came out there! Remember my mum being very into this, I was reeally young when it was on, 3 or 4 maybe, and I just didnt get why they didnt tell you what happened in the end! Still gives me the creeps thinking about it :)

I am definitely a fan of Unsolved Mysteries, especially when Robert Stack was the host. Now that he is in a better place, I think that Dennis Farina is doing a good job. I work and subscribe to DISH Network, so I know between the hours of 11-1pm, I am watching Lifetime in HD so that I can get the best picture quality possible!