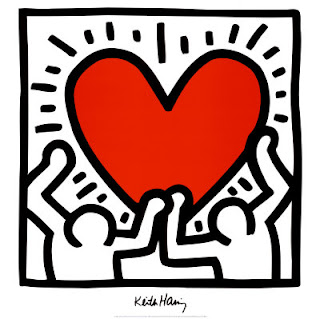 Pop art has always been very hip with young people. Kids from the 1960s had Andy Warhol. Children of the 1970s had Peter Max (I had a Peter Max bed sheet set and loved it!) and we 1980s kids had Keith Haring.

Danny, my BFF in 7th grade (1985), first introduced me to cool Keith Haring designs. He had several Keith Haring Swatch watches, which we thought were totally awesome. I remember posters, t-shirts, stickers and other collectibles could be purchased at Pop Shop on NYC's Lafayette Street in SoHo. The stuff wasn't cheap of course, but it was so rad, you had to have something Keith Haring if you were truly hip and new wave.

I've seen his art, but had no idea who he was, or anything about him at all. An amazingly talented guy.

My best friend knows the guy who was entrusted to Keith's apartment by Keith, when Keith passed away. Guy had a big art gallery in NY up until recently... The name of which escapes my mind at the mo... I've spoken to him, but cannot remember his art gallery grrr lol...

I had so many Keith Haring buttons and other things I purchased at the Walker Art Museum in Minneapolis when I was a kid. I really dug his stuff.

It's nice to know that Madonna paid tribute to Keith Haring that way.
xoRobyn

I've always liked his stuff. Who was Peter Max though?

I actually lived in a town that bordered his home town...Kutztown...for 19 years. He definitely was worthy of all the honors his home town bestowed on him

Here is another fact. he learned many of his designs by getting "tips" from a young Puertorican graffiti artistnamed Angel Ortiz who showed him how to do the designs and colors that he became well known for later. Many Haring paintings were actually done by Angel Ortiz AKA LA2.
http://www.graffiti.org/la2/index.html

I've been to that store. Man that Keith was a genius. FYI...I had a Peter Max tie back in the day. Made me the flyest kid in Jr. High.