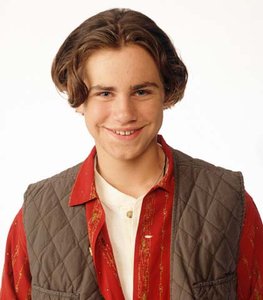 hahaha. I never understood the popularity of that show in general, but I also couldn't stand Full House and that was popular...

Rider Strong was a bad boy trapped in a wholesome show. He was the Uncle Jesse of Boy Meets World.

And where is he now? Probably living off his Boy Meets World fortune and wishing he had let you photograph him. Maybe then, his credit in his most recent movie would be a little more prominent than "Young Man."

He was cute and all but seriously?
sidenote: my captcha for this is 'inane'

All I'm saying is he could have been a little nicer. We didn't even want to take his damn photo or talk to him. I could see if we were following him or bothering him, but really. I just thought it was rude.

LOL! Wow. I'm going to be honest, I thought BMW was alright and all, but mostly because Corey was so damn baby-faced cute, and Eric was just a funny idiot.

As far as Shaun/Rider, the only reason his name every stuck in my mind was because my best friend in 7th grade commented on how if you said it right, it sounded inappropriately like "ride her strong".

I want to know when you finally get that apology. When he hits 40 and his BMW cha-ching has run low. He'll be begging you to take his picture, if not just for Dancing with the Stars :p

Ugh. What is it with celebrity's being such a-holes? Now if Ben Savage had come at me like that, I definitely would have cried like a baby.

I used to have such a crush on him!!! He does owe you an apology because yeah 1998 if you were Nick Lachey or something yeah I can understand that but Rider Strong? I would think he would have been flattered by then that someone still wanted this picture. geez.

@Melanie Nick Lachey was super sweet. He was easy to interview and photograph and never once gave us an attitude. I um, cried for him when he and Jessica got divorced. That interview in Rolling Stone he did broke my heart. He seemed so sad.

I hate when I find out that guys I had enormous fan-girl crushes on are egomaniacal d-bags. Seriously...get over yourself, Mr. Rider Strong!!

Oh, he was just trying to make hisself feel better cuz he was so lame, huh?? Poor widdle washed up wierdo.

Also, it sounds more like the publicist owes you an apology, right? Rider Strong never actually said anything to you?

Wow...who knew he was a jerk. Anyone who was ever within a 3 meter radius of him apparently.

Seriously? Um, you nailed on the head! NOBODY remembered him in 98!!

I never got into this show. Was I out of it?

The nerve of D-list celebs. Please say Danielle Fishel wasn't like that. Not that I know who she is.

I loved Cabin Fever. It took me nearly 1 hour 22 minutes to figure out where I knew him from. I was like... AGHHHH!!! BOY MEETS WORLD!

Never saw it even once. But I still find your life stories very interesting Ally...

I agree. I don't understand how Hollywood has so much room for all those egos.
Never knew Mr. Rider either.
xoRobyn

Ehh. I was in love with him while Boy meets world. I still think he is such a pretty boy but he was so BAD and I loved him.