I hate to admit this, but I truly believe that I just may have gotten way more "action" in my high school years, than I've ever had in my more adult years. There, I said it. Well, then again, I recall one or two steamy nights in the backseat of my Mazda Protege with my college boyfriend. Stony Brook wasn't too far from some secluded beaches. Well, they were secluded in the fall and winter months that's for sure. But still, I experienced an abundance of true teen steam between 11th and 12th grade which will never be forgotten. 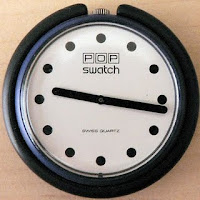 The majority of 10th grade was dull and uneventful. I dated some kid from my homeroom. We honestly had nothing in common other than a shared love of Swatch watches. Our hot moment was a temporary Swatch trade. He wore mine and I wore his. Lucky for him, I didn't own girly Swatch watches. Nope, only bulky Pop Swatches and chunky manly Swatch watches for this broad.

I don't even remember how we got to talking. Believe it or not, I hardly spoke between 1988-1990. My memories of that short-lived fling were enough to fill, hmm, maybe half of a diary page. I once met up with him at our local sports field for some lame high school football game - that was totally NOT my scene, but he was in the marching band I think.

I vaguely recall that day. I went with my friend Eric who kept warning me he wasn't the best choice. Other than having nothing in common, I don't remember this kid being an especially "bad" kid  ... maybe it was just the fact that he wasn't really my type.

I think the only other memory I have of this guy involves him randomly skateboarding to my house and my being shocked the he actually knew how to skateboard. At that time, I was all about skateboarders. Funny, the skateboard fetish lasted for many years. OK, so even today, if my floppy haired husband in his cute baggy jeans and Simple sneakers jumped on a skateboard, my heart would possibly flutter a bit.

So yeah, that 10th grade fall fling lasted a hot ten minutes. I was rehashing that story last night to an old classmate and still can't recall how it ended. I wonder if we left on bad terms, not that it matters now. Just curious. I do know that I never spoke to him ever again and looking at him turned my stomach.

Fast forward to 11th grade. A bushy haired, blue-eyed chubby kid clad in old sweats and flannel shirts began inching near my locker. Each week, it seemed like this kid was moving closer and closer to our lockers. "Our" as in my trusty, nonthreatening BFF, Scott and me. We began to wonder. Who was this little nerdo and why was he moving in on us? I wish I could recall what happened next, knowing me, I probably had Scott confront him to get the scoop. What I do remember from that time frame were lots of heartfelt notes back and forth and within a week I was smitten.

He won me over with his soft-spoken manner and the biggest blue eyes and longest lushest lashes I had ever seen. His clothes were a nightmare, but I knew I could remedy that no problem. He smelled nice. He always wore cologne. He complimented my skirts and sweaters. He liked my makeup, my dangling spiderweb earrings and bleached out hair. He said sweet things to me and held my hand. He made me feel pretty. It was amazing. I was hook, line and sinker gaga over him and he would become my very- first-ever everything.

The tricky part of this hot and steamy affair was that neither of us were legally able to drive. He was a year younger than me and I have the November birthday. Not that the late birthday even mattered since I failed my road test three times (Garden City twice AND Freeport). I didn't pass until the end of my freshman year in college and had to leave the state to do so.

But the no car thing didn't stop us! We were lip locked like 24-7 and being without wheels, called for lots of creativity. We hid behind book shelves at both the town library AND school library. We huddled behind trees and bushes near the train station at night while waiting for our parents to pick us up. Steamy walks in the park behind the school before saying our goodbyes for the day. We once somehow found our way into the high school auditorium. The balcony set the stage for our own private love scene during a school rehearsal of "Our Town." The sun lit up the nook we secured by a window as the dramatic thespians practiced their lines.

High school boyfriend and I remained a couple until about the middle of my freshman year at Fitchburg State. Things fizzled out which is to be expected from a long distance high school student vs. college student relationship. He didn't drive and I was about 4 hours away. His folks were strict and wouldn't "allow" him to visit me by bus in another state. I cheated on him at least three different times with nameless faces by Christmas. It was destined to fail.

Years passed and we grew up and moved on. However, memories of our steamy teen romance will always have a special place in my heart. Somewhere in my mother's basement is a banged up, old shoebox overflowing with his cards, photos, love letters and trinkets. Yes, I have countless cards from my husband dating back to 2002. Though it's hard to compare a few sweet lines sprinkled in a Birthday or Christmas card to the pure adolescent love scribbled on pages of tattered lose leaf.


The many diaries of my youth and letters from my high school love. 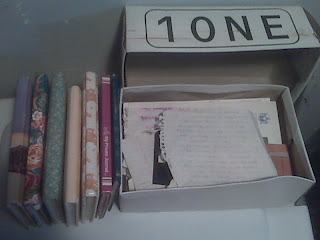 Yeah, there's just something about HS boyfriends that you can never replicate as an adult. Guess it all just gets too complicated.

I tossed all my old stuff from my major HS flame, but kept the 'promise ring' he gave me. Sentimental fool I am, sometimes! Oh, said HS flame tracked me down last year, we met once for coffee. He's a total creep, haha.

That's funny, thanks for sharing that :) I have this trunk at my mom's filled with old memories. I'm a sucker.