As a kid, all I ever wanted to do was star on a television show or in movies. I'd put on skits with my younger brother for my parents and grandparents, then again, who didn't do this? In order to make our confirmation, we were interviewed by a teacher from our small Catholic school. Of course, I got stuck with 90-year-old Sister Frances who wasn't my biggest fan. When she asked what I wanted to do career-wise, I told her, "I'm going to be a famous actress and have my own show." She shook her head and said that Hollywood was a sinful place and did nothing to help others. I told her I would help others by making them laugh and would donate money to the poor. She was not convinced.

Well, it's about 25 years later and I'm still not a famous actress and gave up the dream before hitting high school - I didn't even have the courage to join the drama troupe or audition for plays after graduating 8th grade. Ironically I've still managed to successfully nab a few funny on-air moments.

In high school I loved WLIR/WDRE. Depending on when you listened, this station was Long Island's only new wave/alternative rock station. And although the call letters changed every few years, the play list pretty much remained the same. On my fifteenth birthday I called the station in the morning requesting "Little 15" by Depeche Mode - my favorite band at the time. For whatever reason, I always found myself on the air. I called a few months later and requested "Superman" by R.E.M. and this time the DJ demanded that I actually sing the song on the air! Luckily I knew the lyrics, but still - yikes! I did it, I didn't care. I'm not sure if anyone I even knew heard it.

My final year of college required me to complete an internship in media. Thinking I may still want to pursue TV, I interned at CBS working at The Geraldo Show in Columbus Circle. Whenever we were low on audience members, the crew would ask that we fill in. I loved it! I would listen intently using appropriate and often exaggerated facial expressions while teens from Arkansas and Alabama divulged tales of being beaten up by their step dads. Knowing the camera was on me, I'd squeak out a tear watching someone geek become chic. I was a master at what I referred to as "video acting" (think of music videos with people smiling, crying, looking off into the distance, yelling but you hear nothing but the song, etc.)... 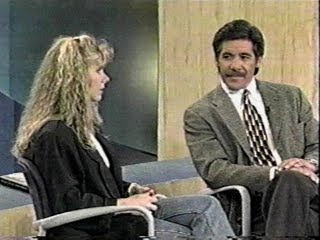 About ten years later, commuting to my teen mag job in NYC, I was waiting on the platform listening to my Walkman (before ipods!) and heard the WLIR/WDRE DJs asking listeners a question about the Lion King movie. At that time, we were writing so many stories about this kid, Jonathan Taylor Thomas that I could tell you his birthday, fave color, siblings names and to this day remember he's from Bethlehem, PA. I quickly called in and told them he was indeed the voice of Simba and they demanded to know why I knew that and laughed when I told them I was an editor at SuperTeen magazine. We all laughed and I promised to send them some issues of the mag.

Less than an hour later, I settle in at my desk and my good friend Tarah calls me. Apparently her alarm clock went off and just who did she hear gabbing away on the air? Why me of course! She joked that it was so typical of me to get on the radio, but of all things to wake up to.

About a year later Conan O'Brien decided he was going to do a funny skit on becoming a boy band member. His crew came to our offices and we took it all very seriously. We sat around a conference room table and brought copies of our magazines filled with pinups and centerfolds of Backstreet Boys and 'N Sync. We utilized flip charts and markers to share the secret to boy band success. I didn't expect to have a speaking part, but suggested Conan grow some funky facial hair. Conan was intrigued and asked me to elaborate. I did so by showing him a photo of one of the Backstreet Boys and his signature look. 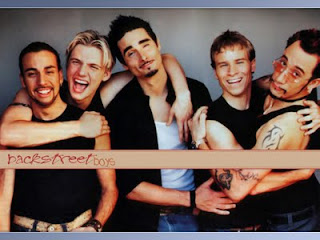 After a long hiatus of radio and TV airtime, I recently had another shot at a few more minutes of fame when a UPN 9 news crew approached me. It's so funny because I spotted them as we pulled into our local diner. We ordered soup and salad and I said, "Watch they come in and try to talk to us about fatties in America or something." Just my luck. Of course, not even ten minutes after I whispered that, the reporter and her camera guy were at our table begging us to talk. My friend refused and told them how she just broke up with her bf and was too upset to go on camera. Instead, she insisted they talk to me. I cringed, but did it since they were so persistent and the diner happened to be empty at the time.

That was two weeks ago. I wonder when my next shot at stardom will take place. Hopefully one day it will be in the literary world since I don't exactly have the look the cameras want to know better.
at 3:15 PM