Just One of The Guys and Ralph Macchio 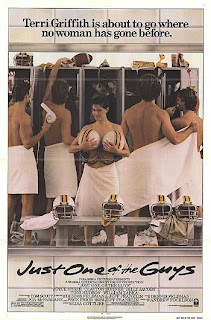 1985 produced an abundance of awesome teen flicks from Back to the Future to The Goonies. Still on my Karate Kid kick from the previous year, I was madly obsessed with Ralph Macchio. Side note, Ralph and I were both Italian Americans from Long Island born on November 4 - top that ladies! Sure he was much older than me, but we had mad sh*t in common.

In the Spring of 1985, my BFF and I (her folks banned her from hanging out with me once we graduated 8th grade, more on that another day) ventured over to Sunrise Cinemas on Sunrise Highway to catch the latest teen flick, Just One of The Guys. This movie was typical '80s cheese. I loved it. Filled with great styles, fun music, silly dirty jokes, innuendos and attractive young actors with names I've since forgotten, other than Billy Jane aka Billy Jacoby.
Two things I loved about this film -- in addition to the romantic twist ...  The lead character was a writer, I've always loved writing and wanted to have my own magazine and at the time was a kid reporter for Long Island / New York Newsday. I also thought it was very odd that the lead actress (Joyce Hyser) who played Terri Griffith was made to look very similar to my Ralph Macchio. Anyone else catch this?
View the trailer for Just  One Of The Guys

Email ThisBlogThis!Share to TwitterShare to FacebookShare to Pinterest
Labels: 80s movies, Just One Of The Guys, Ralph Macchio

Hey, yo, scumbag! Suck your own! Eat me.

I have never seen or heard of that movie.

Don't remember that movie at all.
Found it interesting that your friend's mother wouldn't let you hang with her any more. Same thing happen to my son when he went to high school. Best friends since elementary school and then his mom thought my son was a bad influence. Well her son became a drug user in high school, dropped out, haven't heard what happen to him since. So much for my son being the bad influence....

I remember the movie but I never saw it. I will have to fix this. But yes, she really does look like Ralph.

I remember when the movie came out. I didn't see it. Hey - a blog can CERTAINLY be a stepping stone to being a "real" writer and having your own magazine!

I remember that movie, AND I had a big crush on Ralph Macchio in fifth grade.

One of my favorites...but the one thing I could never understand was-

HOW THE HELL DID SHE HIDE THOSE GIANT BOOBS???

Never heard of that movie. I do think she looks like Ralph though.

I watched The Outsiders the other day and thought he was actually really, really good in that movie. I have not seen this one though. It was probably one my mom didn't let me see.

Ooh really good catch. As a creepy guy I'm still reminded of the gratuitous beach scene with the guy who didn't believe she was a girl.

I loved this movie!!!! Thanks for the flashback.

BTW...made you blog of the day.

The chic playing the guy has a great set of tits! Which are shown towards end of movie.. Great tits