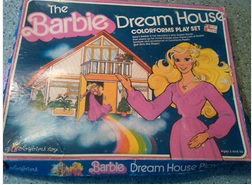 Poof - dream sequence ruined ... Can you imagine the horror I felt when my cousin (she's in her early 20s) shot me a confused look and asked, "What are Colorforms?" It's times like that you realize your true age. For you younger folks who have never heard of Colorforms, please keep reading!
Five Fast Colorform Facts
View a vintage Colorforms commercial
For a complete history lesson and cool Colorforms facts and info, please visit toy inventor and legend, Mel Birnkrant's Colorforms web site at: Melbirnkrant.com/colorforms.
at 10:22 AM

Wow I rememeber these. Oh the barbie dream house. I never had any of the stuff because at the time it was just WAYY too expensive. I was always jealous of my lil richer cousin cuz she had these cool toys. Oh colorforms...I think I had the New Kids on the Block ones back in the day! =)

Happy bday to your cousin too!

I remember that my first (of many) girlfriends back in the late 1970's had those things.

I loved Colorforms. I wish that I could remember which 2 that I had though. That was a cute commercial. I clicked onto the Pound Puppy one too - I want that Colorform set.

Sorry that you never got your Barbie Dream house but it is good that you had fun with your Colorform one. There's a few toys that I wish that my parents had gotten me too like Lite Brite.

Of course I didn't have the Barbie set, but I definitely remember that cloriform crud. I have no idea how you remember all this stuff.

Do you remember "Muscle Men". Or was this just a boy fad toy?

Well - being a guy (and a bit older) I can't say I was into these. I do, however, remember them and seeing them in all sorts of different applications.

I will have to admit that I did not know that they were called Colorforms. I just always thought of them as "puffy plastic stickers". I can imagine that not only were they cool to have, they probably revolutionized the sticker industry.

Aaaah - I didn't know what 'colorforms' were either. Like Blast from the Past, I thought of them as puffy plastic stickers too. But these were removable, right? I'm not sure I ever had any of these myself.

I don't think I ever knew about these, but I would have wanted them if I did. I wanted the actual dream house SOOOOOO bad, but never got it. Sigh. My parents got me a Barbie cottage & thought that was good enough. It wasn't.

Never heard of these things, but then again, I'm a guy...

My wife has so much barbie stuff all over our house. One large closet totally full and a large display case in our living room FULL of vintage stuff...