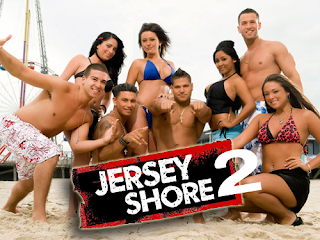 I'm getting slightly off topic today to celebrate the second season or Season Two of MTV's Jersey Shore. One of my buddies from high school posted on her Facebook page today something about guidos from our high school as we prep for our 20th high school reunion. Her post reminded me of how much I hated GUIDOS growing up! As an Italian American I grew up in a very Italian American area on Long Island, New York -- in fact one of the cast members of Jersey Shore, JWOWW (Jenni Farley) is from my old neighborhood.


The irony of Jersey Shore, which has some Jersey folk up in arms, is that only one cast member, Sammi "Sweetheart" Giancola" is even from the state of New Jersey. The rest of the cast hail from New York and Paul "DJ Pauly D" DelVecchio is from Rhode Island -- I never knew Rhode Island even had guidos!

The idea behind the show, in case you have yet to catch an episode, is basically like MTV's The Real World only eight guidos/guidette strangers picked to live in a house ... work together and have their lives taped ... to find out what happens when people stop being polite and start getting real ...  These guys hook up (trying to avoid "grenades" aka ugly girls) party, smoke and drink and get into scuffles with each other and the locals.

They live for fake tans, hair gel, working out and battling on the dance floor to shitty music. It makes for great entertainment and although as I said, I am Italian and feel that, yes they are stereotyping us (I was never a guido) and they make New Jersey look less than alluring. I've been to the shore many times and the areas I visit aren't filled with fist pumping guidos with over-sized muscles and gelled hair.

I spent my youth avoiding guidos. I have never dated or befriended a guido. I worked hard to avoid purchasing anything remotely resembling something that could be considered "guido".  Yet tonight, I am so anxious to park my ass in front of our flat screen and tune in to MTV at 10 PM and LMAO at Jersey Shore Season 2 in Miami. I can't wait to catch up with my imaginary friends Snooki, The Situation, Ronnie, Vinny (my fave), Sammi, JWOWW, Angelina and Pauly.

I have never watched the show...and I'm half Italian - shame on me! I have heard a lot about the show, I guess I should watch a few past episodes.

As a west-coaster, I always wanted to visit the East... Jersey Shore, Brooklyn, NY city...

It's a whole different culture back east. Out here it's very transitory, back east, people seem to have roots. =)

OK, this had almost nothing to do with the OP, because I don't watch MTV, but I wanted to say *something* lol

Like we don't have enough bad press in NJ, we need these boneheads coming to our state to tape and make people think we're all like that. UGH.

I have never seen one single episode of this show. Is the first season out on dvd yet?

Yeah I should have asked...duh...you grew up around alot of people like that eh?

Well, at least the entire cast IS from the east coast...

Ally- So, do u enjoy the show? I've never watched it but saw trailers to it... No thanks... Even Real Housewives of NJ turns me off.

The show doesn't appeal to me but then I've never really spent more than a couple hours in Jersey. That is funny though that they aren't even from Jersey.

Ugh.
Guidos.
One of the worst things about living on Long Island....

Would you believe I've never seen any of these shows??? Oh yeah...that's cuz I'm SHELTERED.

I still don't think I have ever met a real guido in real life yet. I have met wannabes, but never a real one. They are not common here in Utah.

I wonder if they have guido polygimists though???

Say what you want but the show is entertaining. Guidos are the Italian versian of Cholos for Mexicans so I can sort of relate.

I have friends from NJ and I'm happy/sorry to say that I do see some of their "culture" in the show. Not that I've watched it or anything....

mmm a JS post how odd. haha. It's so funny that they brought Angelina back. She was the one that left halfway through the first season, right? H

I have such great memories of the real Jersey shore. I am not into reality based shows like this and from what I've heard it is pretty bad.

I have only watched a few minutes of the first season but keep hearing about everyone getting hooked. Maybe I will add it to my list.

They totally are guidos and do nothing but continue the stereotype. And why or why does Snooki think that Poodle Poof looks good?!

I'm from the west coast and married to an Italian boy born and bred in Jersey. (We still haven't made it out to Jersey but it's on the list of to-do's.) Life seems so different on the east coast. I really envy my family in Jersey and Upstate New York.

The show cracks me up. I mean really how shallow can people be??

Haven't seen this one. Outgrew the Real World, and for my reality tv I am stuck on Flipping Out, Real Housewives, and Toddlers and Tiaras. Not sure why... To each his own I guess. It's all great fun as far as I'm concerned. Enjoy it!!

wahhhhhhhh i fucking FORGOT TO WATCH!!! i know, i totally want to kick myself in the nuts over this one.

i love me some embarrassing stereotypes

I have to watch that show just in case one of them die. I would hate to miss it. Didn't Snookie get arrested today for being a drunken skank on the beach? Too funny.

I've never seen this show. I just keep forgetting to watch it.

I cannot stand this show yet can't look away when it is on. It's like a train wreck...

it is like a train wreck.
i have to watch it..
and my hubby HATES IT