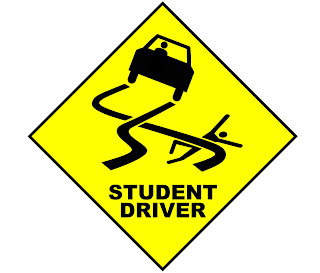 As a kid, I was a victim of "the late birthday". That situation where you just make the cut off for your grade by about a month. I was always one of the youngest kids in my class. I think I was only five by the time I started first grade and I entered my freshman year of college at age 17. I couldn't even vote if there was some sort of election before 11/4.

Because of the late birthday deal, I was unable to partake in drivers ed the summer before my junior year of high school along with the rest of the kids. Luckily my BFF Scott had a November birthday like me and we were able to sign up together which was cool since I didn't really like many of my other classmates.

However, unlike Scott, I was a horrible test taker. Seriously. Give me a test on my more favorite TV show or the celeb I love most. If the answers were multiple choice with a teacher grading it, you could bet I'd fail it. I always knew the info, but panicked and failed regardless. It's amazing I even had a permit! I made sure I read that driving manual cover-to-cover like fifteen times. I memorized the information knowing I'd be nervous taking it in the DMV classroom.

Fast forward to end of summer. I passed the class, but failed the road test. I took it again, failed. Tried again, failed. And although I took it in a different part of Long Island each time, I still failed. Throughout senior year, each time I failed, my mom and I would get all bummed out. She would remind me over and over again, "You know how to drive. You're a good driver. I feel comfortable with you driving. Why can't you just relax?!" Ironically, my dad taught driver ed in the summer at the high school he worked at. After a few lessons with him, we called it quits. He didn't have the patience for me or my nerves.

The worst part about failing my road test three times, was that I never actually got to complete the test. The road test Nazi seated next to me would watch droplets of sweat fall from my face as I turned the key, positioned both shaky hands perfectly on the wheel at 10 and 2 and within a few seconds, they'd simply say, "OK, turn the vehicle off. Sorry, you've failed." I once did manage to pull away from the curb but my anxiety engulfed my entire body and mind, sorta like the way the Hulk transformed Bruce Banner, only in a very uncool fashion. I was obviously asked to turn around.

The furthest I got was in Freeport, Long Island. Driving along the very busy Sunrise Highway, I came upon a light. When asked to make a left turn, I spazzed. I couldn't breathe. I waited to go as cars sped up to run the light. I never felt I had a safe opportunity to make that left turn. The light turned red. I waited and waited and waited and after two changes of the light, the tester said, "OK, I'm going to tell you when to turn. This test is officially over, you have failed." 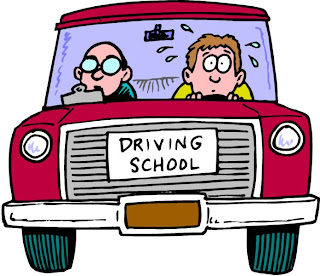 I never got to show them my terrific three-point turn or perfect parallel park. It was over. I gave up. I was going to graduate high school without my license. It was official. My first summer as a high school grad and my parents were still dropping me off at the movies and mall. Although BFF Scott had his license, he chose not to buy a car so we were both stuck. You can't survive on Long Island without a car. The public transportation is horrendous. I had heard it took over 2 hours and like three different bus changes to get to the county's colleges.

Having a feeling this might happen, I decided to go away to school. I had always loved New England, so I picked a small state college in Massachusetts. I will always be grateful for the small town of Fitchburg and their driving regulations. They were so much more relaxed than New York.

My parents paid for ten driving lessons up there. I looked up local driving schools and found one named "Allie's Driving School" and I knew I had to call them. I mean, it was my name! Turned out, Allie was about 70-years-old and super duper cranky. We got off to a rough start, but she eventually warmed up to me and offered up some great tips.

I hated driving alongside a truck or construction (still do). I had this feeling that things were closer than they truly were. She would always yell out, "Look straight ahead. Don't you dare look at whatever it is to the side." In this case, I think it was a guardrail along the road. It worked! It kinda reminded me of bowling, how you're supposed to look straight ahead and bring your hand straight up and then you get a strike. Bad analogy, but to me it makes sense. It's all tricking your peripheral vision I guess.

The time came for me to take my road test that spring and of course the nervousness returned. I felt like, by this time, if I couldn't pass, I was done for. What I didn't know was that in Massachusetts, they allow your parent or driving instructor to remain in the car during the test. Allie being a townie and driving instructor in the area most of her life, paid off for me. She knew each of the RMV (that's what they call the DMV there) employees.

As soon as this tough-looking New England guy sat down next to me in the old teal green Ford Taurus, Allie greeted him from the backseat, "Hey Jim! How's it going?" she said in a sing-song old lady voice. "Starting to look more like spring every day, huh?" he replied. "Say, how's the little lady doing? Little Jimmy doing well?" The two chatted back and forth, while he squeezed in a, "Turn left here" and "Turn right there" ... I was in heaven. He barely paid attention to me.

I was lovin' Jim and Allie. We were all in this together, like a team on a driving mission. I mean I was ready for a road trip with these two. It was great! My final big move was to park, not parallel because that's not how they did it there, but in a basic parking spot at the RMV. Come on, how difficult could that be? There weren't even any cars around, it was a big empty spot you'd see like at the grocery store. I pulled the Taurus in and thought, "I think I have this. I think I may have actually passed."

I turned the car off and looked at him sheepishly. With a non-smiling face, he said, "Yeah, you passed." We exited the car, and he handed me a signed piece of paper and said, "You are now a licensed driver in the state of Massachusetts." I asked if I could hug him. He said yes. I bear hugged him and told him I loved him and thanked him for giving me the best gift I've ever gotten in my entire life. He let out a dry chuckle. I raced into the small RMV building, they snapped my pic and gave me my license. I slept with it under my pillow that night.
at 12:51 PM