I'll never understand what goes on within the male mind. Sure, I could pick up a crap load of psychology books and search the web until my eyes bug out, but deep down I'll just never understand why guys constantly pass up awesome girls. Some say fear of commitment. If you're a chick, you will probably just shut me up with a simple, "guys suck." But this doesn't do it for me. I need more of an answer than that.

I know this girl. She's super cool. She's super pretty. She's super into working out and eats all this healthy crap. I wish I could be half as good as she is when it comes to eating right. She's smart with a variety of degrees to back it up and is from one of those "good families." She even goes to church! She's the type who doesn't argue over a dollar if she picks up a coffee for you. She's the kind of girl you would introduce to your best guy friend or brother in hopes they'd marry her. Maybe her only flaw, in a guy's world is, gasp, she has confidence. She has a reason to be self-assured, I would be too if I were her.

Over the past few months, she's been hanging out with this guy and wondering where they are headed. Suddenly the pressure is on and he's doing the, "You're an awesome friend" thing and it's really pissing me off. What's wrong with him? She's several years younger than him so it's not like she's ready for marriage. He's over 30 so you can't say he's too young to get serious - not that she ever told him she was looking for a move-in-with-me-next-month boyfriend. He loves doing stuff with her like hittin' golf balls around and doing the yuppie happy hour scene together.

I hate to say this "out loud," but it's situations like this that make me thankful to be married and done playing the damn game. It's a relentless cycle. Now I'm not speaking for her, I'm thinking about my own experiences here.

You get to know someone, give them all of your thoughts. Spend all of this special energy on them. You know what I mean? That "What do I wear? I must purchase an outfit on my way home from work for tonight" energy. That laying in bed thinking, "Will he call me tomorrow?" energy. Spending so much time "wondering" where things will go if they will go anywhere. The meeting his friends thing. The hoping his parents are nice thing. Ugh, it sucks. I don't want to ever relive all that.

Online dating is even worse. Then you have the constant series of interviews. It's quite similar to putting yourself on Monster.com. You do the initial email. Then there's the follow-up email. If he liked your "cover letter" then you've landed your first interview, a-hem, date. Date one is the big interview. You're spiffed up in your best gear with not a hair out of place. You've thought and rethought your makeup and jewelry. Each word that leaves your lips is clever and somewhat rehearsed.

If it goes well, you'll receive a call back. I guess for those who are actors, it's much like an audition. Right? So then you go ahead with interview two, maybe a third one, by the fourth encounter, you're then on 30-90 days probation. You get the idea...

I'm no prize and I'm not claiming to be. I just feel for my girls who have to deal with the emotional roller coaster guessing game otherwise known as dating scene. However, when things go well for them, then I secretly live vicariously through the single girls. Experiencing the excitement and newness along with them. But when things don't go as well, my heart aches and I want to clobber these guys and say, "Dude, this chick rocks and you're totally missing out!" 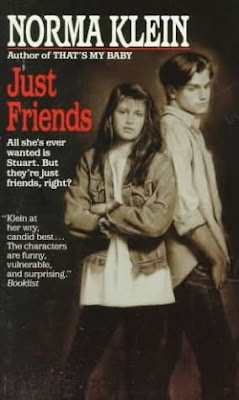 I read this book years ago even though it was written for younger teens and I was about 18, it was so my life.
at 8:23 PM

Maybe he's just not into her.

Seriously... there's a lot to be said for chemistry. Who knows why one is attracted to another. I look at the men I've been with and think ha ha, I find him irresistible but maybe some other broad would think he's repulsive!

Talking about the interview... I remember distinctly, I was sitting in Jose Texas with some dude I picked up in Hoboken. We were 3/4 of the way done with our "date" and he turns to me and says, dead serious: "So... where do you see yourself in five years?"

And I thought, "Ughh... not with you, pal!" (there was other reasons why he was a complete cheeseball but I won't go into those).