I Swear, There Were Boys At My Girl Scout Camp! 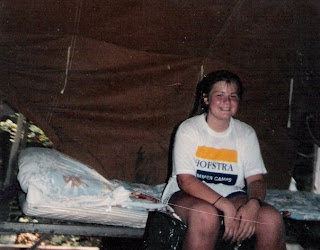 As we do every day, today at lunch, we set a few minutes aside for one of my many childhood stories – my coworkers do so enjoy these wild tales. Obviously you do too, you come back and check this ridiculous blog weekly based on the info the good folks at Google are providing me with…

So, today’s tale caused a bit of a stir and has left me confused, torn and downright conflicted. My mind is oozing with self-doubt and a slew of unanswered questions. I can’t help but wonder if I’ve imagined this entire situation. I need answers and I better freakin’ get some soon!

For those of you who once subscribed to my MySpace Blog, forgive me if you’re heard this before, but here’s the deal …

In the summers of 1984 and 1985, I attended Camp Blue Bay in East Hampton. This was a Girl Scout camp. I wasn’t a real Girl Scout, but that’s OK, it just meant that my folks simply had to lay out a few extra bucks to unload me for a one week interval.

Don’t get me wrong, I loved Camp Blue Bay, aside from having to swim in non-pool waters and sleeping fully clothed under my ET blanket, clutching a flashlight. I was afraid of bears attacking us and the thought of running in my nightgown and bare feet through the beach woods terrified me even more. The cure for this was sleeping in my clothes with sneakers on. In retrospect that’s humorous. Imagine bears on the beach?

Reminiscing about my two fun-filled summers at Camp Blue Bay brought back memories of a young romantic interlude I encountered with a boy named Matt. Matt was from Queens and he was about a year older but looked very young. I think I found out later he had a hormone problem them kept him on the short side and very youthful looking.

My coworkers joked that he was probably like a 40-year-old Joe Peschi look-alike groundskeeper. As if I’d mistake that for a cute young boy. Whatever! They looked at me in disbelief and questioned the entire story as if I would lie about something that retarded. So here I sit in a state of confusion. It’s so unnerving wondering why this kid was at my camp. I actually emailed someone who handles email inquiries regarding Camp Blue Bay and if she doesn’t reply, I will contact them on Facebook – yes, I’m a member of their club.

So yes, why was there a boy at a camp for girls? Why? What was he doing there? Was he someone’s kid? We kissed behind a bush! Would my parents like the idea knowing that they sent their little girl to what was supposed to be a safe all-girl summer camp, only to get mixed up with some dirty boy from Queens? Hot summer lovin’ is going on miles away from my safe, uneventful Nassau County home. Here I am out in the Hamptons making out with some dude? How did this happen? Who let him in to kiss innocent 11-year-old girls?!

Apparently the program I was part of included grades 5-8. Now, honestly, if you ask me there’s a big difference between a fifth grader and an eighth grader. I mean really! Grade 8 is like junior high maturity! Those chicks didn’t care that Kirk Cameron was on the cover of Tiger Beat. They were on to the real deal. We’re talking girls in leather jackets with big hair who smoked CIGARETTES in the bathroom at school!

Which reminds me, I recall two broads lighting up a cig and breakin’ out a bottle of wine during “rest time” back behind the lean-to. Being a good Catholic school girl, I rallied my buddies and we rushed off to have a heart-to-heart with one of the CITs (that’s “Counselor in Training” for all you non-campers) and reported those dirty girls. We didn’t have to worry about them beating us up either – they were quickly whisked back to Commack or wherever they were from.

Man, camp was awesome. What a way to break up the monotony of watching reruns of The Partridge Family and riding bikes to that candy store on Meacham Avenue to play hours of Pac Man. 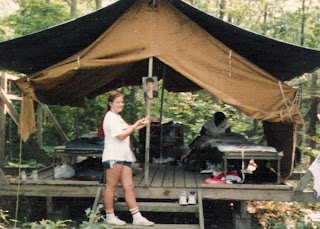 So fucking great! I love this entire story, and in fact the whole series of blog entries. Keep it coming!

UPDATE:
I left a comment on the Camp Blue Bay FB page. It turns out YES, boys were at camp that year. They were chronically ill, I think Matt had a kidney disease or something :(